Are telling us to keep doors and windows closed during a smoke in the Valley 'event' like the present one (the wind is blowing from the east and moving forest fire smoke from the Cascades east of Salem into the Willamette Valley); almost wish I had read that last night before sleeping with the window open as usual. As obnoxious as the smoke is, my sinuses were unblocked after sleep; usually it takes an hour of being up before that happens. Who knows. This photograph is lifted from the Register-Guard, this morning I think. 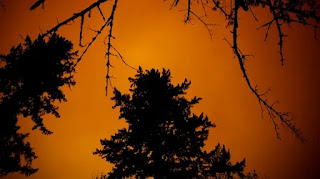 Holy Mass for the Nativity of Our Lady from Saint-Eugène is (rather unusually) at 1000, relieving me of the challenge of saying the Office and following Mass at midnight or 0200.

I realized only when I stepped out the door that there is a visible fall of ash-- as ash doesn't melt almost instantaneously when it gets into the eyes, unlike snow flakes, I wished I had put on my cap. Completed the morning spatiamentum without serious incident, however. These two photographs are my own (obviously), from fifteen and ten minutes ago. 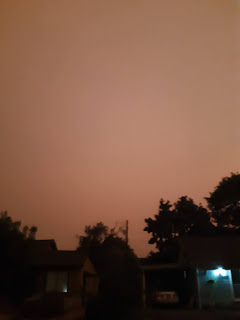 On a cloudless morning, it is brilliantly sunny by this point-- it's 0719 now. How much of that is ash and how much cloud, I don't know. Five minutes later, from my cubiculum. 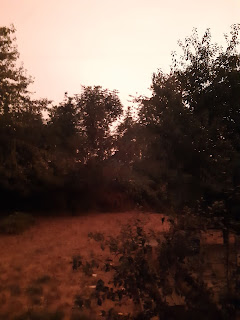 Yesterday afternoon and evening's high winds-- there were branches scattered about on the sidewalks and streets-- were supposed to have left very low relative humidity this morning, and I think that that must be the case. The National Weather Service in Portland says that is a clear day today, so am presuming that most of what is in the sky is ash.

It has only now-- at almost 0800-- struck me that I have heard no birds this morning, none; the jays are absent. Well, there was a bird, I think, briefly, in the neighbor's back yard. And there are another couple of them.

Perhaps the ashy skies will prevent the temperature from rising beyond 90° F. this afternoon. Time for Terce.

I notice that at Saint-Eugène, the sequence or prose Nativitas Mariae virginis will be sung. I had been reading Adam of Saint-Victor's  sequence for today's feast, Salve mater salvatoris, and happened to see the one phrase, manu sapientiae, '[shaped, formed] by the hand of Wisdom', in both proses. I must look about at the Liturgia website later on and see if perhaps M. de Villiers hasn't written about Adam's work. Well, he does point out that what is presumably the same Salve mater salvatoris was traditionally sung on the Octave, the 15th, when the feast of the Sorrows of Our Lady is celebrated. I must catch up on my reading, it seems.

Nicola Porpora's Carlo il Calvo is being broadcast from Bayreuth-- there is a 'Baroque festival' underway, I gather-- which will almost certainly be broadcast when I am occupied with Holy Mass, tsk. We shall see; my time conversions are often rather off: I get local time and GMT confused. Fagioli, Cencic, Lezhneva.

Porpora's 'Carlo il Calvo' is a dramma per musica in three acts based on a Venetian libretto dating from 1699 which, under various titles, has been set to music by composers. The plot is set in that period of the early Middle Ages when Charlemagne’s Europe was disintegrating at the hands of his quarrelling heirs. Its distinctive feature is that the titular hero is a child. In contrast to his colleagues, Porpora even gives him some verses to sing. Louis the German, Charles’ half-brother and Charlemagne’s grandson, abducts the legitimate heir to the throne in order to rob him of his sovereignty.

I followed Holy Mass from Saint-Eugène, Salva sancta Parens (the Schola sang both prosae, happily, the one in its proper place and the other during the incensing at the Offertory), and so far as I can tell Carlo il Calvo is still going strong.

The production places the characters as gangsters in the 30s, perhaps-- I see a few images on Bayreuth Baroque's Facebook page. Eh. But am very little interested in the production as such. The opera is being streamed on Facebook in two parts, tomorrow and Thursday.

Leonardo Vinci's Gismondo Re di Polonia (which began its life as Il vincitore generoso) is being broadcast live on Friday. This is ringing a small bell in my memory: I ought to know more about this work of Vinci's than I seem to be able to remember at the moment. Probably because I scribbled about this back in June.