The fifth of the Great Antiphons, O Oriens... 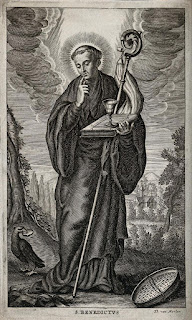 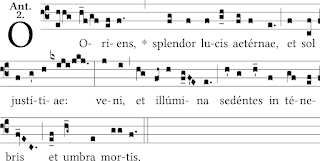 O Jesus, divine Sun, thou art coming to snatch us from eternal night: blessed for ever be thy infinite goodness. But thou puttest our faith to the test, before showing thyself in all thy brightness. Thou hidest thy rays, until the time decreed by thy heavenly Father comes, in which all thy beauty will break upon the world. Thou art traversing Judea; thou art near Jerusalem; the journey of Mary and Joseph is nigh its term. Crowds of men pass or meet thee on the road, each one hurrying to his native town, there to be enrolled, as the Edict commands. Not one of all these suspects that thou, divine Orient, art so near him. They see thy Mother Mary, and they see nothing in her above the rest of women or if they are impressed by the majesty and incomparable modesty of this august Queen, it is but vague feeling of surprise at there being such dignity in one so poor as she is and they soon forget her again. If the Mother is thus an object of indifference to them, it is not to be expected that they will give even so much as a thought to her Child, that is not yet born. And yet this Child is thyself, Sun of Justice! Oh, increase our Faith, but increase, too, our Love. If these men loved thee, Redeemer of mankind, thou wouldst give them the grace to feel thy presence; their eyes, indeed, would not yet see thee, but their hearts, at least, would burn within them, they would long for thy Coming, and would hasten it by their prayers and sighs. Dearest Jesus who thus traversest the world thou hast created, and who forcest not the homage of thy creatures, we wish to keep near thee during the rest of this thy journey: we kiss the footsteps of Her that carries thee in her womb; we will not leave thee, until we arrive together with thee at Bethlehem, that House of Bread, where, at last, our eyes will see thee, splendour of eternal light, our Lord and our God!
Eleanor Parker on today's antiphon and the Winter Solstice, with Saint Bede the Venerable (from her series of posts in 2013).

It's no coincidence that 'O Oriens' is sung on the evening of the winter solstice, as darkness falls on the longest night of the year - the time when winter is at its deepest, but the year's turning-point has come. In the antiphon and in the Old English poem, Christ is figured as the dawn and the returning sun, appearing in the time of greatest darkness, in the depth of the season the Anglo-Saxons called midwinter. In his De temporum ratione, Bede explains the traditional understanding of the relationship between the church year and the equinoxes and solstices: "very many of the Church’s teachers recount... that our Lord was conceived and suffered on the 8th kalends of April [25 March], at the spring equinox, and that he was born at the winter solstice on the 8th kalends of January [25 December]. And again, that the Lord’s blessed precursor and Baptist was conceived at the autumn equinox on the 8th kalends of October [24 September] and born at the summer solstice on the 8th kalends of July [24 June]. To this they add the explanation that it was fitting that the Creator of eternal light should be conceived and born along with the increase of temporal light, and that the herald of penance, who must decrease, should be engendered and born at a time when the light is diminishing" (The Reckoning of Time, trans. Faith Wallis, 2004). 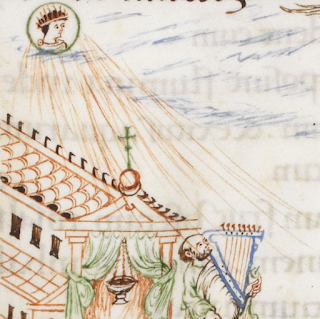 There was a moment (of a couple of years' length, ahem) in the early 1970s when I was a particularly perfervid reader of Tolkien's The Lord of the Rings; that this was before the proliferation of Tolkien studies (and, indeed, before the publication of The Silmarillion) is, with the benefit of hindsight, probably a happenstance of unknowing good timing-- I can visualize myself settled into a faculty office preoccupied with Old and Middle English texts and (very unlike the illustrious Doctors Parker and Rauer!) being unbelievably tiresome about it all. (The image is lifted directly from Dr Parker's post but it's from the British Library's MS Harley 603, f. 55v, so presumably I could have copied it directly from there, were I not as lazy as I am.)
LDVM
December 21 Dom Prosper Guéranger OSB Dr Eleanor Parker Duodecimo Kalendas Ianuarii L'Année Liturgique O Oriens