On the feast of Saint Ambrose, Bishop and Doctor of the Church... 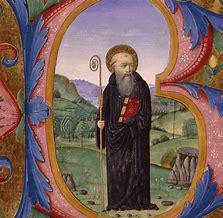 Let us salute this great Doctor in the words which the holy Church addresses to him in the Office of Vespers.

And we, too, Immortal Ambrose, unworthy though we be to take part in such a choir, we, too, will praise thee. We will praise the magnificent gifts which our Lord bestowed upon thee. Thou art the Light of the Church and the Salt of the earth by thy heavenly teachings; thou art the vigilant Pastor, the affectionate Father, the unyielding Pontiff: oh how must thy heart have loved that Jesus, for whom we are now preparing. With what undaunted courage thou didst, at the risk of thy life, resist them that blasphemed this Divine Word. Well indeed hast thou thereby merited to be made one of the Patrons of the faithful, to lead them, each year, to Him who is their Saviour and their King. Let, then, a ray of the truth, which filled thy sublime soul whilst here on earth, penetrate even into our hearts give us relish of thy sweet and eloquent writings; get us a sentiment of devoted love for the Jesus who is so soon to be with us. Obtain for us, after thy example, to take up his cause with energy, against the enemies of our holy faith, against the spirits of darkness, and against ourselves. Let every thing yield, let everything be annihilated, let every knee bow, let every heart confess itself conquered, in the presence of Jesus, the eternal Word of the Father, the Son of God, and the Son of Mary, our Redeemer, our Judge, our All.

Glorious Saint, humble us, as thou didst Theodosius; raise us up again contrite and converted, as thou didst lovingly raise up this thy strayed sheep and carry him back to thy fold. Pray, too, for the Catholic Hierarchy, of which thou wast one of the brightest ornaments. Ask of God, for the Priests and Bishops of his Church, that humble yet inflexible courage, wherewith they should resist the Powers of the world, as often as they abuse the authority which God has put into their hands. Let their face, as our Lord himself speaks, become hard as adamant (Ezech 1) against the enemies of the Church, and may they set themselves as wall for the house of Israel (Ezech 13); may they consider it as the highest privilege, and the greatest happiness, to be permitted to expose their property, and peace, and life, for the liberty of this holy Spouse of Christ. Valiant champion of the Truth! arm thyself with thy scourge, which the Church has given thee as thy emblem and drive far from the flock of Christ the wolves of the Arian tribe, which, under various names, are even now prowling round the fold. Let our ears be no longer shocked with the blasphemies of these proud teachers, who presume to scan, judge, approve, and blame, by the measure of their vain conceits, the great God who has given them every thing they are and have, and who, out of infinite love for his creatures, has deigned to humble himself and become one of ourselves, although knowing that men would make this very condescension an argument for denying that he is God.
Remove our prejudices, thou great lover of truth, and crush within us those time-serving and unwise theories, which tend to make us Christians forget that Jesus is the King of this world, and look on the law, which equally protects error and truth, as the perfection of modern systems. May we understand that the rights of the Son of God and his Church do not cease to exist, because the world ceases to acknowledge them, that to give the same protection to the true religion and to those false doctrines, which men have set up in opposition to the teaching of the Church, is to deny that all power has been given to Jesus in heaven and on earth, that those scourges which periodically come upon the world are the lessons which Jesus gives to those who trample on the Rights of his Church, Rights which he so justly acquired by dying on the Cross for all mankind that, finally, though it be out of our power to restore those Rights to people that have had the misfortune to resign them, yet it is our duty, under pain of being accomplices with those who would not have Jesus reign over them, to acknowledge that they are the Rights of the Church.
And lastly, dear Saint, in the midst of the dark clouds which lower over the world, console our holy Mother the Church, who is now but stranger and pilgrim amidst those nations which were her children, but have now denied her; may she cull the flowers of holy Virginity among the faithful, and may that holy state be the attraction of those fortunate souls who understand how grand is the dignity of being the Spouse of Christ. If, at the very commencement of her ministry, during the ages of persecution, the holy Church could lead countless Virgins to Jesus, may it be so even now in our own age of crime and sensuality; may those pure and generous hearts, formed and consecrated to the Lamb by this holy Mother, become more and more numerous and so give to her enemies this irresistible proof that she is not barren, as they pretend, and that it is she that alone preserves the world from universal corruption, by leavening it with this angelic purity.
Let us consider that last visible preparation for the coming of the Messias: universal Peace. The din of war is silenced, and the entire world is intent in expectation. "There are three Silences to be considered," says St. Bonaventure, in one of his Sermons for Advent: "the first in the days of Noah, after the deluge had destroyed all sinners; the second, in the days of Caesar Augustus, when all nations were subjected to the empire; the third will be at the death of Antichrist, when the Jews shall be converted." Jesus! Prince of Peace, thou willest that the world shall be in peace, when thou art coming down to dwell in it. Thou didst foretell this by the Psalmist, thy ancestor in the flesh, who, speaking of thee, said He shall make wars to cease even to the end of the earth: " he shall destroy the bow, and break the weapons; and the shield he shall burn in the fire" (Psalm 45). And why is this, O Jesus? It is, that hearts, which thou art to visit, must be silent and attentive. It is that before thou enterest a soul, thou troublest it in thy great mercy, as the world was troubled and agitated before the universal peace; then thou bringest peace into that soul, and thou takest possession of her. Oh come quickly, dear Lord, subdue our rebellious senses, bring low the haughtiness of our spirit, crucify our flesh, rouse our hearts from their sleep and then may thy entrance into our souls be a feast-day of triumph, as when a conqueror enters a city which he has taken after long siege. Sweet Jesus, Prince of Peace, give us peace; fix thy kingdom so firmly in our hearts, that thou mayest reign in us for ever.