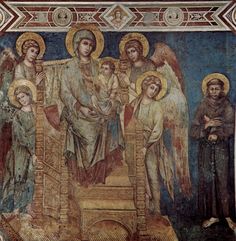 At the Office of Prime, in Cathedral Chapters and Monasteries, the announcement of tomorrow's Feast is made with unusual solemnity. The Lector, who frequently is one of the dignitaries of the Choir, sings, to a magnificent chant, the following Lesson from the
Martyrology. All the assistants remain standing during it, until the Lector comes to the word Bethlehem, at which all genuflect, and continue in that posture until all the glad Tidings are told.
Anno a creatione mundi, quando in principio Deus creavit caelum et terram, quinquies millesimo centesimo nonagesimo nono; a diluvio autem, anno bis millesimo nongentesimo quinquagesimo septimo; a nativitate Abrahae, anno bis millesimo quintodecimo; a Moyse et egressu populi Israel de Aegypto, anno millesimo quingentesimo decimo;
ab unctione David in Regem, anno millesimo trigesimo secundo; Hebdomada sexagesima quinta, juxta Danielis prophetiam; Olympiade centesima nonagesima quarta; ab urbe Roma condita, anno septingentesimo quinquagesimo secundo; anno Imperii Octaviani Augusti quadragesimo secundo, toto Orbe in pace composito, sexta mundi aetate, Jesus Christus, aeternus Deus aeternique Patris Filius, mundum volens adventu suo piissimo consecrare, de Spiritu Sancto conceptus, novemque post conceptionem decursis mensibus [Hic vox elevatur, et omnes genua flectunt], in Bethlehem Judae nascitur ex Maria Virgine factus Homo. [Hic autem in priori voce dicitur, et in tono passionis:] Nativitas Domini nostri Jesu Christi secundum carnem. [Quod sequitur, legitur in tono Lectionis consueto; et surgunt omnes.]
I will admit that I had never noticed that the Martyrology gives the count of the number of years from the Creation to the Incarnation as 5,199 as in the Septuagint, whereas the Vulgate gives 4,199. I expect the Pauline Rite uses the Vulgate 4,199 but cannot recall with certainty. Dom Prosper explains in a note:
On this one day alone, and on this single occasion, does the Church adopt the Septuagint Chronology, according to which the Birth, of our Saviour took place five thousand years after the creation whereas the Vulgate version, and the Hebrew text, place only four thousand between the two events. This is not a fitting place to explain this discrepancy of chronology; we merely allude to it as showing the liberty which the Church allows us on this question.
Will add this 'discrepancy' to my ever-lengthening list of 'questions to be looked into one of these days'... but now is truly not a fitting time to be fussing about it. Back to Dom Prosper on the Vigil.
The Martyrologium revised in the so-called 'postconciliar spirit'  avoids this Septuagint versus Vulgate altogether by simply introducing a new text (Innumeris transactis saeculis a creatione mundi...) that leaves out the specific count of years before the migratio Abrahae. The marvels of modern liturgical science!
Thus have passed before us, in succession, all the generations of the world. Each of them is asked if it have seen Him whom we are expecting, and each is silent until the name of Mary is pronounced, and then is proclaimed the Nativity of Jesus Christ, the Son of God made Man. St. Bernard speaking of this announcement, says:
The voice of joy has gone forth in our land, the voice of rejoicing and of salvation is in the tabernacles of the just. There has been heard a good word, a word that gives consolation, a word that is full of gladsomeness, a word worthy of all acceptance: Resound with praise, ye mountains, and all ye trees of the forests clap your hands before the face of the Lord, for he is coming. Hearken, ye heavens! and give ear, O earth! be astounded and give praise, all ye creatures, but thou, man, more than all they! Jesus Christ, the Son of God, is born in Bethlehem of Juda. Who is there, that is so hard of heart, that this word does not touch him? Could anything be told us sweeter than this? Could any news delight us like this? Was such a thing ever heard, or anything like it ever told to the world? Jesus Christ, the Son of God, is born in Bethlehem of Juda! O brief word of the Word abridged! (Rom 9) and yet how full of heavenly beauty. The heart, charmed with the honeyed sweetness of the expression, would fain diffuse it and spread it out into more words but no, it must be given just as it is, or you spoil it: Jesus Christ, the Son of God, is born in Bethlehem of Juda! (Serm 2 in Vigilia Nativitatis)
At this point, Dom Prosper turns to the text of the Mass, Hodie scietis.
LDVM
ad Horam Primam Dom Prosper Guéranger OSB In Vigilia Nativitatis Domini Nostri Iesu Christi L'Année Liturgique Sanctus Bernardus Confessor Ecclesiae Doctoris