Here followeth the Nativity of Our Lord Jesus Christ... 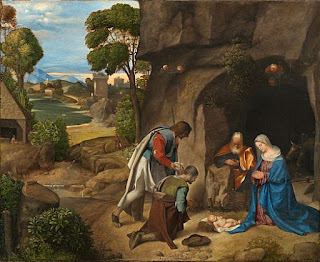 When the world had endured five thousand and nine hundred years, after Eusebius the holy saint, Octavian the Emperor commanded that all the world should be described, so that he might know how many cities, how many towns, and how many persons he had in all the universal world. Then was so great peace in the earth that all the world was obedient to him. And therefore our Lord would be born in that time, that it should be known that he brought peace from heaven. And this Emperor commanded that every man should go into the towns, cities or villages from whence they were of, and should bring with him a penny in acknowledgment that he was subject to the Empire of Rome. And by so many pence as should be found received, should be known the number of the persons. Joseph which then was of the lineage of David, and dwelled in Nazareth, went into the city of Bethlehem, and led with him the Virgin Mary his wife. And when they were come thither, because the hostelries were all taken up, they were constrained to be without in a common place where all people went. And there was a stable for an ass that he brought with him, and for an ox. In that night our Blessed Lady and Mother of God was delivered of our Blessed Saviour upon the hay that lay in the rack. At which nativity our Lord shewed many marvels. For because that the world was in so great peace, the Romans had done made a temple which was named the Temple of Peace, in which they counselled with Apollo to know how long it should stand and endure. Apollo answered to them that, it should stand as long till a maid had brought forth and borne a child. And therefore they did do write on the portal of the Temple: Lo! this is the temple of peace that ever shall endure. For they supposed well that a maid might never bear [there may  be text missing here]
... [there seems to be text missing here] Bethlehem, there may ye find him wrapt in clouts. And anon, as the angel had said this, a multitude of angels appeared with him, and began to sing. Honour, glory and health be to God on high, and in the earth peace to men of goodwill. Then said the shepherds, let us go to Bethlehem and see this thing. And when they came they found like as the angel had said.
And it happed this night that all the sodomites that did sin against nature were dead and extinct; for God hated so much this sin, that he might not suffer that nature human, which he had taken, were delivered to so great shame. Whereof S. Austin saith that, it lacked but little that God would not become man for that sin.
In this time Octavian made to cut and enlarge the ways and quitted the Romans of all the debts that they owed to him. This feast of Nativity of our Lord is one of the greatest feasts of all the year, and for to tell all the miracles that our Lord hath showed, it should contain a whole book; but at this time I shall leave and pass over save one thing that I have heard once preached of a worshipful doctor, that what person being in clean life desire on this day a boon of God, as far as it is rightful and good for him, our Lord at the reverence of this blessed high feast of his Nativity will grant it to him. Then let us always make us in clean life at this feast that we may so please him, that after this short life we may come unto his bliss. Amen.
I'd be interested to know whence derives the notion about the death of all sodomites prior to the Incarnation of Our Lord, by which the human nature was taken up to the divine. The most famous instance of Saint Augustine's noting the sinfulness of sodomy is in Book 3 of his Confessions, chapter 8, and teaches what is the common doctrine of Holy Church-- nothing about this particular question, unless the final sentence is it; Dame Maria Boulding's translation.
"... By the same token, vices contrary to nature are everywhere and always to be detested and punished. Such were the sins of the Sodomites. If all nations behaved as the Sodomites did, they too would be held guilty under the divine law, which did not make men to have that kind of relationship with each other. The very fellowship which ought to hold between ourselves and God is violated when our nature is defiled by perverted lust, since our nature is his creation."
LDVM
Golden Legend Legenda aurea Sollemnitas Nativitatis Domini Nostri Iesu Christi William Caxton