Here followeth the Life of Saint Thomas, martyr, of Canterbury, and first the exposition of his name... 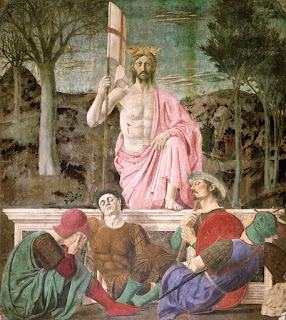 Thomas is as much to say as abisme or double, or trenched and hewn, he was an abisme profound in humility, as it appeared in the hair that he wore, and in washing of the feet of the poor people, double in prelation that was in word and in ensample, and hewn and trenched in his passion.
S. Thomas the martyr was son to Gilbert Beckett, a burgess of the city of London, and was born in the place where as now standeth the church called S. Thomas of Acre. And this Gilbert was a good devout man, and took the cross upon him, and went on pilgrimage into the Holy Land, and had a servant with his knees. And on a Trinity Sunday received he his dignity, and there was at that time the king with many a great lord and sixteen bishops. And from thence was sent the abbot of Evesham to the pope with other clerks for the pall which he gave and brought to him, and he full meekly received it. And under his habit he ware the habit of a monk, and so was he under within forth a monk, and outward a clerk, and did great abstinence making his body lean and his soul fat. And he used to be well served at his table, and took but little refection thereof, and lived holily in giving good ensample. 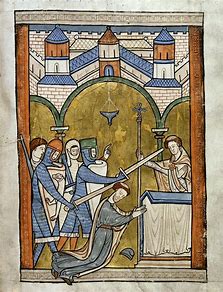 And forthwith four knights took their counsel together and thought they would do to the king a pleasure, and emprised to slay S. Thomas, and suddenly departed and took their shipping towards England. And when the king knew of their departing he was sorry and sent after them, but they were on the sea and departed ere the messengers came, wherefore the king was heavy and sorry.

These be the names of the four knights: Sir Reginald Fitzurse, Sir Hugh de Morville, Sir William de Tracy, Sir Richard le Breton. On Christmas day S. Thomas made a sermon at Canterbury in his own church, and weeping, prayed the people to pray for him, for he knew well his time was nigh, and there executed the sentence on them that were against the right of holy church. And that same day as the king sat at meat all the bread that he handled waxed anon mouldy and hoar, that no man might eat of it, and the bread that they touched not was fair and good for to eat.

And these four knights aforesaid came to Canterbury on the Tuesday in Christmas week about Evensong time, and came to S. Thomas and said that the king commanded him to make amends for the wrongs that he had done, and also that he should assoil all them that he had accursed anon, or else they should slay him. Then said Thomas: All that I ought to do by right, that will I with a good will do, but as to the sentence that is executed I may not undo, but that they will submit them to the correction of holy church, for it was done by our holy father the pope and not by me. Then said Sir Reginald: But if thou assoil the king and all other standing in the curse, it shall cost thee thy life. And S. Thomas said: Thou knowest well enough that the king and I were accorded on Mary Magdalene day, and that this curse should go forth on them that had offended the church.

Then one of the knights smote him as he kneeled before the altar on the head. And one Sir Edward Grim, that was his crossier put forth his arm with the cross to bear off the stroke, and the stroke smote the cross asunder and his arm almost off, wherefore he fled for fear, and so did all the monks, that were that time at compline. And then smote each at him, that they smote off a great piece of the skull of his head, that his brain fell on the pavement. And so they slew and martyred him, and were so cruel that one of them brake the point of his sword against the pavement. And thus this holy and blessed Archbishop S. Thomas suffered death in his own church for the right of all holy church. And when he was dead they stirred his brain, and after went in to his chamber and took away his goods, and his horse out of his stable, and took away his bulls and writings, and delivered them to Sir Robert Broke to bear into France to the king. And as they searched his chamber they found in a chest two shirts of hair made full of great knots, and then they said: Certainly he was a good man; and coming down into the churchward they began to dread and fear that the ground would not have borne them, and were marvellously aghast, but they supposed that the earth would have swallowed them all quick. And then they knew that they had done amiss. And anon it was known all about, how that he was martyred, and anon after took this holy body, and unclothed him, and found bishop's clothing above, and the habit of a monk under. And next his flesh he wore hard hair, full of knots, which was his shirt. And his breech was of the same, and the knots slicked fast within the skin, and all his body full of worms; he suffered great pain. And he was thus martyred the year of our Lord one thousand one hundred and seventy-one, and was fifty-three years old. And soon after tidings came to the king how he was slain, wherefore the king took great sorrow, and sent to Rome for his absolution.

Now after that S. Thomas departed from the pope, the pope would daily look upon the white chasuble that S. Thomas had said mass in, and the same day that he was martyred he saw it turned into red, whereby he knew well that that same day he suffered martyrdom for the right of holy church, and commanded a mass of requiem solemnly to be sung for his soul. And when the quire began to sing requiem, an angel on high above began the office of a martyr: Letabitur justus, and then all the quire followed singing forth the mass of the office of a martyr. And the pope thanked God that it pleased him to show such miracles for his holy martyr, at whose tomb by the merits and prayers of this holy martyr our blessed Lord hath showed many miracles. The blind have recovered their sight, the dumb their speech, the deaf their hearing, the lame their limbs, and the dead their life. If I should here express all the miracles that it hath pleased God to show for this holy saint it should contain a whole volume, therefore at this time, I pass over unto the feast of his translation, where I propose with the grace of God to recite some of them. Then let us pray to this glorious martyr to be our advocate, that by his petition we may come to everlasting bliss. Amen.
LDVM
December 29 Festo Sancti Thomae Cantuariensi Episcopi et Martyris Golden Legend Legenda aurea Quarto Kalendas Ianuarii William Caxton