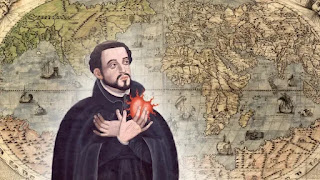 A treat for the feast of Saint Francis Xavier, Confessor, is Marc-Antoine Charpentier's Canticum in honorem Sancti Francisci Xaverii H 355, from 1690. The performers are the Ensemble Vocal de Nantes (still making wonderful music; Paul Colleaux was succeeded by Gilles Ragon in 2015) and Stradivaria, Ensemble Baroque de Nantes, under the direction of Daniel Cuiller. The commentary is from 1988's Marc-Antoine Charpentier by Dr Catherine Cessac (English and French), the English version of which (by E. Thomas Glasow) was published here in Oregon, at Portland.

"After a busy fugal prelude..."

"... the haut-dessus depicts Francis Xavier as an angel in a stunning garland of sixteenth notes, which represent the ascent of God's missionary, complete with dynamic markings (alternately 'soft' and 'loud' to emphasize the spatial effect). The sweet sonorities of the flutes interact in dialogue with the voice, and the description continues: haloed in light, the angelic Francis Xavier is ubiquitous, over land and sea. An interlude for strings rises higher gradually and the voice, now accompanied by violins, traces the rising path of the sun, to which the saint is now compared. After a duet for the hauts-dessus inviting 'people immersed in the shadows' to come to this source of light, the choice celebrates the work of the Lord. On five separate occasions, a silence serves to represent, better than any song, everyone's stunned admiration before such great marvels, prior to their joyous outburst (Cantabimus canticum)."

"At the center of the work is the solo for Xaverius, accompanied in turns by muted strings, full orchestra, and solo flutes. Moving imperceptibly from accompanied recitative into arioso, then to an air with repeat, the evangelist addresses God and affirms, confident in the love that sustains him, that no torment can stop him in his mission."

"This solo needs to be analyzed word-by-word and note-by-note to realize the extent of the rhetorical effects: repetitions, a superb highlighting of ego autem through a quickening the tempo, and later of charitatem through augmentation, and a series of melodic progressions building on the word tribulatio an angustia an fames an nuditas an periculum an persecutio an gladius an mors? which culminates on the last word sung on the suspended minor ('serious and magnificent') and end in B flat major ('magnificent and joyous'). Serious and joyous but in both cases magnificent! [in the 17th c-- I don't recall very much about this but it's in the Cessac book-- there was a 'style guide' for serious composition according to the correct Italian idioms (?), adapted in a nuanced way by Charpentier to the French genius: this is the source of the terms 'serious and magnificent' and 'magnificent and joyous']"

One of these days I will find the text (Mme Cessac names an 'anonymous Jesuit' as the author infra).

"In the last part of the motet, the chorus praises the preacher, the apostle, and the master of pagans who throughout the world-- here a sublime passage for the haute-contre and flutes (Stetit et mensura est terra, he stood up and encircled the globe [as the measure of the world])-- accomplished miracles and brought the dead back to life. Charpentier achieves a fine contrast between the word mortuis suddenly sung at 'half-voice' (à demie voix) and suspended, and the word resurgent, which bursts into imitation in all the parts. After another richly descriptive passage (Contriti sunt montes saeculi, incurvati sunt colles mundi, the mountains of this age are crumbling, the earth's hills are bowed down), the final chorus (Et adduxit), in a sort of grand sacred dance, glorifies Francis Xavier's missionary work."

"This motet appears to be a typical example of Jesuit art as it commonly flourished in sermons or tragedies. The deep rhetorical eloquence of the text (the anonymous author was certainly a priest of the Society of Jesus) is amplified and magnified even more by  Charpentier's music. If there is such a thing as 'Jesuit music', this must surely be it."