An early Christmas gift has come to me... 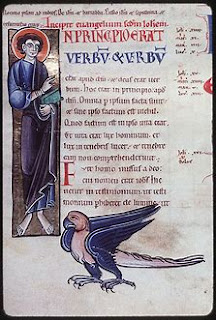 In the form of the discovery of a website that makes available, in one place and all easily accessible, inter alia, the Glossa ordinaria, the Glossa magna of the Venerable Peter the Lombard (on the Psalms and the Epistles of the Apostle Paul), the Postillae of the Venerable Hugo of Saint-Cher, and the Catena aurea (on the Holy Gospels) of the Angelic Doctor. Called Glossae Scripturae Sacrae electronicae it is a spectacular artefact of collaborative work; it's certainly an instance in which the French State has put the taxes it has collected to good use.

The glossed Bible is a corpus of hundreds of thousands of sententiae, sentences, synthetic explications, written in the margins and between the lines of the Sacred Scripture. It forms, altogether, the Sacra pagina, 'the Sacred Page', the foundation for the teaching of theology or Sacra doctrina, 'Sacred Doctrine'.

Circulated by the network of masters of theology and preachers, from the professorial chairs of the schools to the pulpits of the churches, a sort of Reader's Digest of interpretations of the Bible, a privileged witness of the development of the reception of the Fathers and the ancient writers, the Bible glosée created by its authority a common foundation for Western Christianity. It contributed to the cultural and religious construction of Europe, penetrating beyond linguistic and even confessional frontiers to the modern 'Republic of Letters'.

Have already been lost at least twice. I guess I'm expected to know which work of Saint Augustine is included in volume 247 of the Corpus christianorum continuatio medievalis, ahem.

The Gospel's excellence is above all the other pages of the Sacred Scriptures because what the Law and the Prophets foretold for the future the Gospel says is now done and complete.