The Life of Saint Saturnine Bishop and Martyr, and first of his name... 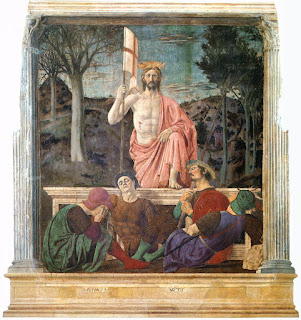 The feast is kept on November 29 in the Roman Calendar but in the Old English Martyrology it is recorded on the 28th.
Saturnine is said of saturare, that is to be filled, and of nux, that is a nut, for the paynims were filled for to martyr him, like as the squirrel that eateth the nut. For when the squirrel taketh the nut for to have it out of the hull, it seemeth to him bitter, then he goeth up on high on the tree and letteth it fall, and then the hull breaketh and the nut springeth out. And thus were the paynims filled in S. Saturnine, for he was bitter to them because he would not do sacrifice, and then they brought him up on high of the Capitol, and cast him down the steps or grees so that he brake his head, and the brain sprang out of it.
Of S. Saturnine.

Saturnine was ordained bishop of the disciples of the apostles, and was sent into the city of Toulouse, and when he entered into the city, the devils ceased to give answers, and then one of the paynims said but if they slew Saturnine they should have none answer of their gods. And they took Saturnine which would not do sacrifice, and bound him to the feet of a bull and drew him unto the highest place of the capitol and cast him down the degrees and steps to the ground, so that his head was all to-broken and the brain sprang out, and so he accomplished his martyrdom. And two women took his body and buried it in a deep place for fear of the paynims, and afterwards his successors took up the body and transported it into a more honourable place.

There was another Saturnine whom the provost of Rome held long in prison, and after, he raised him in the torment named Eculee, and did do beat him with sinews, rods, and scorpions, and after, did do burn his sides, and then took him down and smote off his head, about the year of our Lord two hundred and ninety under Maximian.

And yet there was another Saturnine in Africa which was brother of S. Satyra, S. Revocata, and S. Felicity his sister, and S. Perpetua, which was of noble lineage, which all suffered death together, of whom the passion is holden another time. And when the provost said to them that they should do sacrifice to the idols, they refused it utterly, and he then put them in prison. And when the father of S. Perpetua heard that, he came to the prison weeping, and said: Daughter, thou hast dishonoured all thy lineage, for till now was never none of thy lineage put in to prison. And when he knew that she was christian, he ran upon her and would have scratched out her eyes with his fingers, and crying loud and issued out. And the blessed Perpetua saw a vision which in the morning she said to her fellows: I saw, said she, a ladder of gold of a marvellous height erect to heaven, and was so strait that no man might go but one alone, and coulters and swords of sharp iron were fixed on the right side and left side, so that he that went up might neither look here nor there, but behoved always to behold right up to heaven. And a dragon of horrible great form lay under the ladder, which made every man to dread and fear to mount up, and she saw Satyra ascending by the same unto above and looking to usward, and said: Doubt ye nothing this dragon, but come up surely that ye may be with me. And when they heard this vision, they all gave thankings to our Lord God, for they knew then that they were called to martyrdom, and on the morn they were all presented to the judge, and after, he said to them: It behoveth you to be presented to the gods and do sacrifice to them. But when they would do no sacrifice, he made S. Saturnine to be taken from the women, and to be put among the other men, and he said to S. Felicity: Hast thou a husband? She said: I have one, but I set not by him, and then he said to her: Have mercy on thyself, woman, and live, specially sith thou hast a child in thy belly. To whom she said: Do to me what thou wilt, for thou mayst never draw me to thy will. The father and mother of S. Perpetua, and her husband, ran to her and brought her child to her, which yet sucked. And when her father saw her standing tofore the provost, he fell down and said to her: My most sweet daughter, have mercy on me, and on thy sorrowful mother, and also of this most wretch thy husband, which may not live after thee, and she stood still without moving, and then her father cast his arms about her neck, and he, her mother, and her husband, kissed her, saying: Daughter, have pity of us, and live with us. And then she put the little child from her, and them also, saying: Depart ye, and go ye from me, mine enemies, for I know you not, and then when the provost saw her constancy he made her long to be beaten, and afterwards to be put in prison. And then the other saints were sorrowful for S. Felicity, which had yet months to come of her childing, and prayed to God for her, and anon she began to travail and was delivered of a child alive and quick. Then one of her keepers said to her: What wilt thou do when thou comest tofore the provost, which art yet so grievously tormented? And Felicity answered: I shall here suffer pain for myself, and God shall suffer there for me. And then were these saints drawn out of prison, and were despoiled and led by the streets, and to them were let go beasts, and Satyra and Perpetua were devoured of lions, and Revocata and Felicity were slain of leopards, and S. Saturnine had his head smitten off. And this was about the vear of our Lord two hundred and fifty-six, under Valerian and Galien, emperors.
LDVM
Festo Sancti Saturnini Episcopi et Martyris Legenda aurea William Caxton