Almost time for Vespers of All Saints...

From Paris, followed by Vespers of the Dead, as the day segues into tomorrow. Of course I've not even said Sext yet-- it is only shortly before 1100 here. In this, the divine Liturgy imitates the heavenly worship of all the saints and angels: it can be said to be unceasing, one Hour to the next, until the ending of the age.

The antiphon at the Magnificat of the feast.

And at the Magnificat of the Placebo, Vespers from the Officium Defunctorum. (The Placebo is sung after Benediction of the Most Blessed Sacrament.) 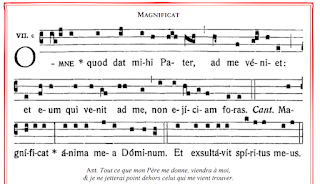 I'm done posting for the rest of the day, at least I think I am. There are never unread books-- sometimes I wonder if this is a blessing or a curse.

I had forgotten that the altar clothes must be changed, flowers removed, candles snuffed out, et cetera, as the Office turns from the joy of the feast to the sobriety of the commemoration of the Dead.

Father Hunwicke yesterday posted a sharp-edged little essay on the cult of relics of the saints, observing that immediately before the revolutionary nonsense of the last Council it was generally the case that the Feast of Relics was observed on the 5th November, i.e. the fifth day infra Octavam. (Dr DiPippo discussed this at New Liturgical Movement the other day, on Wednesday last week-- and I will note that essay when the 5th arrives.)

... I commend to those whose breviaries contain the old Appendix pro aliquibus locis the fine collect and the superb reading from S John Damascene they will find on November 5. Not that the veneration of relics is as late as the fourth century...

I know that the feast is in the 1920 Missal I ordinarily use but it is not included in any version of the Hours available at Divinum Officium (although at some point during the week I will look about again, just in case)-- hence I shall have to sort out which one of my printed breviaries to use. Hmm; I think that in the past I have cottoned on to the occasion after it had passed by (and I may well simply privately commemorate it by adding the collect to the Octave prayers rather than substituting an entirely 'other' Office).

Father Hunwicke illustrates his point-- 'not that it is as late as the fourth century'-- by proceeding to remark on the circumstances of the martyrdom of Saint Polycarp.

... The contemporary account of the martyrdom of S Polycarp, the disciple of S John, embodied in the Encyclical which his Church at Smyrna sent to the Catholic world in the middle of the second century, links the desire of the faithful for his relics with the doctrine of the Communio Sanctorum, the Communion of Saints: "they hoped to koinonesai* with his holy flesh". So, although the hatred of the local Jewish community drove the Romans to burn his body, his people gathered up even the ashes and placed them where they could meet for Mass annually on the genethlion* of his martyrion*, for a mneme* of those who had proathlekoton* and the askesis* and preparation of those who were going to bear witness....

(Father H. does helpfully provide a key* to the Greek for all of us barbarians and semi-barbarians.)
Had the Estonian Radio on earlier and Holst's Jupiter was played; the hymn-y part seemed specially beautiful today and brought tears to my eyes.