on October 15, 2022
Today is the feast of Saint Teresa, the great reformer of Carmel, and, mistress of the life of the spirit, the first female Doctor of the Church, whose heart, most famously, was transverberated by a mystical bolt of fire in a supreme act of the divine Love: divini amoris cuspide/ in vulnus icta concides, as Urbanus VIII wrote in the hymn (one of his many original compositions, I believe, I mean, not a re-writing of a pre-existing text-- but I could be wrong about this; Dom Matthew Britt is not inerrant) which is used at Matins and Vespers, Regis superni nuntia; it is not all that often that we find a proper hymn in a saint's Office.

It will be useful to read Dom Prosper today; Dr Foley published a brief essay at New Liturgical Movement yesterday. Saint Teresa's Mass is Dilexisti iustitiam, although I'm sure that the Carmelites have a proper Mass; they have a feast, too, of the Transverberation, on August 22nd.
Since I've got the recording, will listen to confirm that Dilexisti is the Mass being celebrated before copying/pasting any more text. Troubles in Paradise; the altar seems not to have properly prepared for this Mass. And the servers are not normally accoutred, either; wonder if a couple of fellows had to be dragged in off the street, as it were. The priest, who I'm familiar with by sight (at Solemn Mass, I believe) but whose name is unknown to me, is saying the prayers at the foot of the altar in a loud voice, eh, which is not customary at Saint-E.
Introitus. Ps. 44, 8. Dilexísti justítiam, et odísti iniquitátem: proptérea unxit te Deus, Deus tuus, óleo lætítiae præ consórtibus tuis. Ps. ibid., 2. Eructávit cor meum verbum bonum: dico ego ópera mea Regi. ℣. Glória Patri. 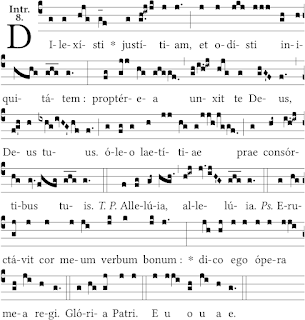 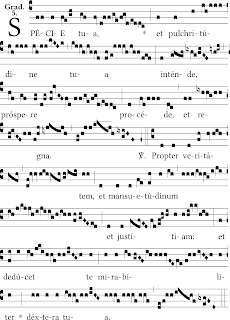 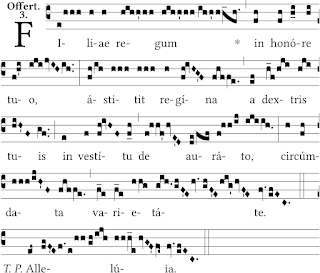 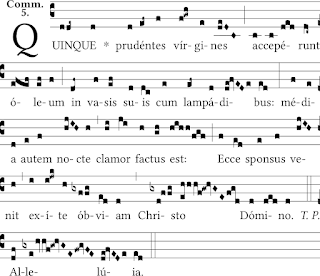 ‘Although the Church triumphant in heaven, and the Church mourning here on earth, appear to be completely separated,’ says Bossuet on this feast, ‘they are nevertheless united by sacred bond. This bond is charity, which is found in this land of exile as well as in our heavenly country; which rejoices the triumphant saints, and animates those still militant; which, descending from heaven to earth, and from angels to men, causes earth to become heaven, and men to become angels. For, holy Jerusalem, happy Church of the first-born whose names are written in heaven, although the Church thy dear sister, who lives and combats here below, ventures not to compare herself with thee, she is not the less assured that holy love unites her to thee. It is true that she is seeking, and thou possessest; that she labours, and thou art at rest; that she hopes, and thou rejoicest. But among all these differences which separate the two so far asunder, there is this at least in common: that what the blessed spirits love, the same we mortals love. Jesus is their life, Jesus is our life; and amid their songs of rapture, and our sighs of sorrow, everywhere are heard to resound these words of the sacred Psalmist: It is good for me to adhere to my God.’ Of this sovereign good of the Church militant and triumphant, Teresa, in time of decadence, was commissioned to remind the world, from the height of Carmel restored by her to its pristine beauty.

Dom Prosper begins by quoting the beginning of Bossuet's Panégyrique de Sainte Thérèse and then continues.

It was then that the Virgin of Avila appeared in the Catholic kingdom. Wonderfully gifted by grace and by nature, she experienced the resistances of the latter, as well as the calls of God, and the purifying delays and progressive triumphs of love; the Holy Ghost, who intended her to be mistress in the Church, led her, if one may so speak, by the classical way of the favours He reserves for the perfect. Having arrived at the mountain of God, she described the road by which she had come, without any pretension but to obey him who commanded her in the name of the Lord.

With exquisite simplicity and unconsciousness of self, she related the works accomplished for her Spouse; made over to her daughters the lessons of her own experience; and described the many mansions of that castle of the human soul, in the centre of which, he that can reach it will find the holy Trinity residing as in an anticipated heaven. No more was needed: withdrawn from speculative abstractions and restored to its sublime simplicity, Christian mysticism again attracted every mind; light reawakened love; the virtues flourished in the Church; and the baneful effects of heresy and its pretended reform were counteracted.

Doubtless Teresa invited no one to attempt, as presumptuously as vainly, to force an entrance into the uncommon paths. But if passive and infused union depends entirely upon God’s good pleasure, the union of effective and active conformity to the divine will, without which the other would be an illusion, may be attained with the help of ordinary grace, by every man of good will. Those who possess it, 'have obtained', says the saint, 'what it was lawful for them to wish for. This is the union have all my life desired, and have always asked of our Lord; it is also the easiest to understand, and the most secure'.

Before I forget to note this, an excerpt from the latest email of M Christian Marquant (of Paix Liturgique) about the continuing rosary-praying etc outside the Apostolic Nunciature in Paris. I heard M Durodié refer to Mons Verny's visit in his sermon at Mass last Sunday (I think! perhaps it was the Sunday before...) and wondered if the continued celebration of the Traditional Mass at Saint-E. had come up.

... But we are determined not to give in. The authorities are aware of this, for example in Paris, where an auxiliary, Mgr Verny, heard the parishioners of Saint-Eugène express themselves before him in a completely frank manner, or again at Sainte-Odile, where the faithful are particularly "upset" to have learned that the archdiocese dreamed of having "only one mass". Why, then, have our pastors, following the lead of the first of them, re-launched, against the most elementary common sense, an absurd liturgical war, when so many problems are befalling an exsanguinated Church?

We were scandalized to learn that Cardinal Robert Sarah was refused by Archbishop Ulrich of Paris to celebrate the traditional Mass for the 40th anniversary of the Pèlerinage de Chrétienté, in the church of Saint-Roch, on Saturday 8 October. Cardinal Sarah, former Prefect of the Congregation for Divine Worship, is not welcome: this is tremendous!

And this same instant, abuses are flourishing in our country, and not minor ones: liturgical blessing of a homosexual "marriage", not in Belgium, but in France, in the diocese of Nîmes; Mass concelebrated by lay people, not in Chur in Switzerland, but in Lourdes in France, where during opening celebration of the thirty-seventh pilgrimage of "Lourdes Cancer Espérance", on Tuesday 20 September, in the Basilica of Saint Pius X, the concelebrating priests were seated among the sick, while many lay people, seated next to them, pronounced the words of consecration with them. But never mind: the only abuse to be eradicated is the Tridentine liturgy and the liturgical creed it represents!...