Was listening to Schola Sainte-Cécile's director...

Henri Adam de Villiers on Radio Courtoisie from just yesterday, as it happens (I saw a notice on his Facebook page), who spoke about the music for the upcoming feast of Our Lady's Nativity; the page is here. It goes behind a paywall after a week.

'Listening' is of course an overstatement: I followed as best I could but my French isn't up to easily comprehending such a spoken text.

One of the composers he mentioned was totally new to me, Bartłomiej Pękiel (fl 1633-1670). German-born, evidently, but Polish throughout his professional life. A recording of his Missa pulcherrima ad instar Praenestini, according to the style of Palestrina.

He also composed what is, they say, Poland's "only church oratorio" (in the original sense of 'oratorio', is what is meant: a work for an audience eager for spiritual edification-cum-entertainment, as at the Oratory of San Filippo Neri at Rome), Audite mortales, on the great and terrible Last Judgment-- I've listened on Spotify (in that recording it's just over 13 minutes in length, from a 3 disc opera omnia by the ensemble Octava [the website is being recalcitrant, here anyway, but August 2022's calendar is there, confirming that they continue to perform] which I'm having to bite my tongue to keep from buying) but I guess it's not at YouTube. And his Missa brevis.

Tuesday morning. I allowed myself to be sidetracked into some of Pękiel's Masses yesterday afternoon but nor is his Nativitas tua (which M. de Villiers discussed, including a recording) at YouTube, either.

Nativitas tua, which is the 6th responsorium at Matins of Our Lady's Nativity (as in the 2nd video recording supra), in the Gregorian notation of its use as the antiphon at the Magnificat at 2nd Vespers of the feast (the 1st and 3rd videos supra). 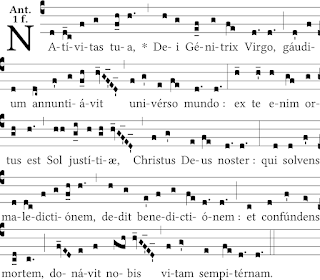