The skies here have become overcast with clouds suffused with...

Smoke from the wildfires burning in the eastern parts of Oregon, although I haven't felt any intimation at all of the 'high easterly winds' that have been predicted to afflict us (nor do I smell the odor of smoke, either). Power companies in the Portland area and here have elected to turn the electricity off for thousands of people rather than risk the possibility that these foreseen 'high easterly winds' might knock down a line that would then perhaps spark a new wildfire. The closest towns which have lost electricty are perhaps 40 or 50 miles away, Walterville and Sweet Home. Hmm. 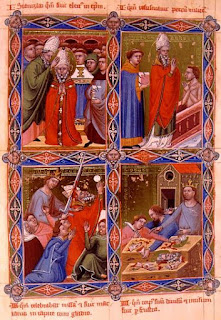 To acknowledge the second day of the Octave of Our Lady's Nativity, Jerycho singing a 15th century version of the Salve, sancta Parens. Not the entire song, alas. 'This was written by a certain brother Seweryn of the Bernardine Order toward the end of the 15th century to be sung as part of the devotion called Coronula Beatae Mariae Virginis' (from the notes of the album Bogarodzica, 2018).  'The initial letters of the stanzas form the acrostic Stanislaus', the name of course of Poland's first saint and martyr. Have found a Coronula duodecim stellarum of the Most Blessed Virgin in Dom Joseph Pothier OSB's 1903 Cantus Mariales; I don't expect that is the same as the devotion Seweryn was writing for but who knows.

M. le Curé is saying the Mass Respice i.e. that of the 13th Sunday post Pentecosten (as I wrote earlier, 'my guess is that the celebrant at Saint-Eugène will say the Mass Respice with commemoration of the holy Martyr, since they seem to be hewing pretty closely to the Ioannes XXIII scheme of things...'). But without commemoration of Saint Gorgonius. The Divinum Officium site in its Ioannes XXIII version says 'at Lauds only' but then gives the Mass with commemoration, so I don't know what the explanation is. Have had recently to acknowledge to myself that DO (for all its sterling usefulness) is an opus imperfectum in certain of its details.

The video recording of today's celebration of Holy Mass.