The silly landscapers were here to mow the grass...

Earlier which, given the fact that there has been approximately one hundredth of an inch of rain since May, seemed rather pointless. 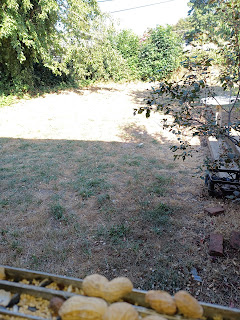 In any case, the newly shorn, almost-barren ground attracts the attention of the birds and as I was throwing a peanut or two to the jays it suddenly dawned on me that I've never seen one of them, one of the scrub jays (Aphelocoma californica or [maybe] Aphelocoma woodhouseii), stuff more than one peanut in its shell into its maw unlike the Steller's jays (Cyanocitta stelleri), which will often cram one (or even two) in only to then pick up another (or a third) in its beak.

Nor do I know if the nuts just going to into the Steller's jay's throats somehow or if there is a crop or crop-like space.

There is evidently a crop, and in the comments there people note Steller's jays eating more than one peanut in its shell at a time and the scrub jays being less likely to do this. I didn't see this addressed but am presuming that the Steller's jays manage to disgorge the peanuts rather than digesting them shell and all. I will ignore the apparent fact that these beautiful birds will steal baby hummingbirds from the nest in order to eat them.