It is become obvious in the last couple of days, D.g., that Summer is coming to an end...

With high temperatures not much beyond 90 and the early mornings being in the low 50s. Yet another brilliant morning ahead with not a cloud in the sky. It is the feast of Saint Aegidius Abbot, Saint Giles, Gilles, with commemoration of the Twelve Holy Brothers (the connections between, and feasts of, those twelve martyrs are... various and messy, ahem), but a ferial day in the later calendars. Saint Giles is one the Fourteen Holy Helpers.

It occurs to me that I used always to also link the article from the old edition of the Catholic Encyclopaedia at this sort of place; that I don't now is simply a reflection of my estimate of the likely very tiny audience here; it is a fact also that my fellow Catholics have done pretty well at ensuring that Wikipedia articles about the saints and the Faith in general are accurate and not at all, as one might expect, impious (and they are many if not most of them in fact lifted directly from the no longer in copyright Catholic Encyclopaedia); not that there aren't also pages devoted to heretics and modernists et cetera that are sometimes quasi-hagiographical in nature, ahem.

His cult spread rapidly far and wide throughout Europe in the Middle Ages, as is witnessed by the numberless churches and monasteries dedicated to him in France, Germany, Poland, Hungary, and the British Isles; by the numerous manuscripts in prose and verse commemorating his virtues and miracles; and especially by the vast concourse of pilgrims who from all Europe flocked to his shrine. In 1562 the relics of the saint were secretly transferred to Toulouse to save them from the hideous excesses of the Huguenots who were then ravaging France, and the pilgrimage in consequence declined. With the restoration of a great part of the relics to the church of St. Giles in 1862, and the discovery of his former tomb there in 1865, the pilgrimages have recommenced.

Am saying the Officium Defunctorum each of these days so am not being as prolix here as sometimes I am.

Pater Thomas SJ is the celebrant of Holy Mass at Saint-E.; I believe we missed him last week but I may well be mistaken. 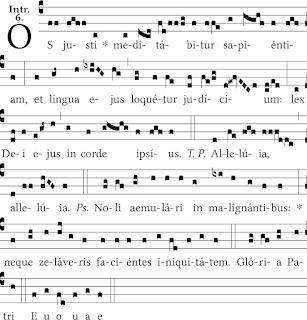 Pater Thomas's sermon is most excellent, as even I can tell with my feeble comprehension; he's tied together Saint Caesarius of Arles, the Fourteen Holy Helpers, Saint Giles's part in the Pilgrimage to Compostela, Charlemagne and so on.
The antiphona ad Communionem. 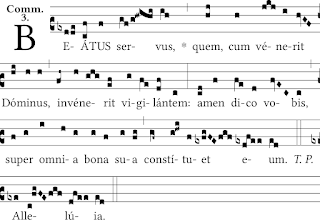 From the Legenda aurea in William Caxton's translation, lifted from the Fordham University website.

The next feast noted in the Legenda aurea is Our Lady's Nativity on the 8th, that is, the 6th day before the Ides of September, Sexto Idus Septembris.
LDVM
Domus Festo Sancti Aegidii Abbatis Officium Defunctorum i.e. Dirige Saint Giles Saint Gilles Saint-Eugène-Sainte-Cécile