An overcast morning, Dawn hiding her face for some reason...

Known best to herself; we are (according to the weather mages) approaching a week of mornings which will see the temperature fall into the 40s. Today is the feast of the martyrs Saints Pope Cornelius and the bishop Cyprian, with commemoration of Saints Euphemia, Lucia, and Geminianus, martyrs also. Am having to do errands this morning so will miss the live-stream of Holy Mass from Saint-Eugène alas. Inter alia, I must renew my Eugene Public Library card before I forget to do so. I do use it quite frequently (if not necessarily daily) to access the online version of the Oxford English Dictionary. The last time I borrowed a book there was, well, sometime in the winter. And I have to keep it valid in order to borrow from the University of Oregon library. The Mass is Intret in conspectu tuo and in the arrangements of Ioannes XXIII a 3rd class feast i.e. I believe there isn't an option this morning to say a different Mass. But I have been mistaken before. 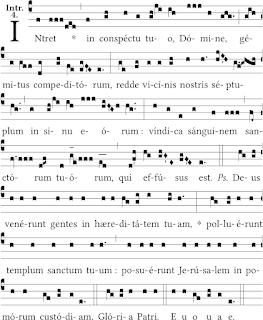 The video recording of this morning's Mass at Saint-E. Am just now returned from my errands. The library was full of infants and children for 'story time', which at the Sheldon Branch presumably doesn't include sex dolls and transvestites-- at least none were in sight.

The BBC is warning of a 22 hour wait to pay respects to the Late Queen in Westminister Hall; the headline at The Times says 24 hours. Something is going on because the live-stream camera is being interrupted by a different feed showing state cars arriving-- is it already time for the 'vigil'? I guess it is half past seven in the evening in London, or half past eight.

The King, the Princess Royal, and Princes Andrew Duke of York and Edward Earl of Wessex [ahem! I originally wrote Duke of Sussex, tsk] are taking their places at the catafalque. And of course it is now that the deities of the Internet have elected to 'narrow my bandwidth' i.e. one of the housemates is using it to play games etc. At this point, after a week (and after the Jubilee last month or whenever it was), I'm able to identify several of the Royal Family etc who are in the loggia; not sure who Mike Tyndall is married to but I recognise her when I see her, and their daughters.