A new meaning of a word a week ago...

In the 'Discover Weekly' playlist that Spotify assures me is specially curated just for me: I had never noticed the Funeral Sentences of Henry Purcell (Z 58, 17, 27 etc), sentence being the word with what was for me a novel meaning.

This is the definition that first comes to mind (sense 6 a, in the OED), more than likely for many:

"A series of words in connected speech or writing, forming the grammatically complete expression of a single thought; in popular use often... such a portion of a composition or utterance as extends from one full stop to another."

But in Purcell's compositions, there is this (sense 5, in the OED):

"An indefinite portion of a discourse or writing; a ‘passage’. Now only (with approach to sense 6), a short passage of Scripture in liturgical use."

And indeed Purcell's Sentences are beautiful. His setting of the Media vita in morte sumus, a responsorium (but for which Hour of which Office I don't know; it's not in any of my books that I can think to check in although it appears in the 1957 Cantus selecti of Solesmes for use in Septuagesima) in the version of the Book of Common Prayer is what caught my eye today. 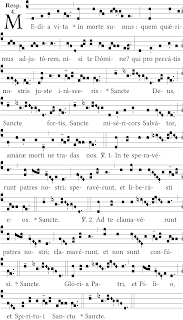 Have wasted several minutes searching the Internet for examples of other composers making 'sentences' but keep getting results that list either the word liturgical or the word sentence in... sentences; ha. I suppose any short liturgical composition could be called a 'sentence'. Perhaps.