Today is the feast of Our Lady of the Snow...

Which we celebrate because of the miracle wrought on today's date in 352 by Our Lady, in commemoration of which Pope Liberius commanded the construction of the Basilica that bears his name, the first great temple erected in the City to honor the Mother of God: which is more commonly call the Basilica of Saint Mary Major. The Mass of this feast of the Dedication is Salve sancta Parens.

The video recording of Holy Mass, streamed earlier from Saint-Eugène in Paris, is here. It was what is called a 'low Mass' i.e. a missa lecta, celebrated by one priest with no chanting of the lessons, no ministers assisting, no schola. The month of August in France is almost entirely given over to being en vacances, ha, and I expect that the Schola Sainte-Cécile follows the custom no less sedulously than the great majority of their fellow countrymen.

It being the First Friday of the month, M. Grodziski said the Mass Cogitationes Cordis eius, of the Most Sacred Heart of Our Lord, with commemoration of the feast of Our Lady of the Snows, i.e. he added the orations (collect, offertory, and communion) from Our Lady's Mass to those of the Cogitationes. 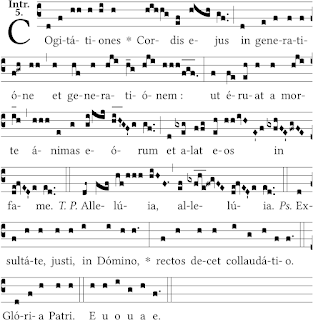 I wonder what will happen tomorrow (if tomorrow's Mass is live-streamed), the Feast of the Transfiguration of Our Lord Jesus Christ. The proper Mass is Illuxerunt coruscationes tuae; I cannot off the top of my head think which is the Mass for the Immaculate Heart of Our Lady (it being the First Saturday), nor do I know if the rank of Our Lord's feast prevents or allows commemoration of the Lady's. I could look it up of course but, eh, it doesn't affect the Hours of the Office that I'll say myself and tomorrow will come soon enough.
LDVM
Domus Festo Beatae Virginis Mariae ad Nives First Fridays Saint-Eugène-Sainte-Cécile