Two being place-names from the Martyrology and the third is from today's Gospel lesson, from the 19th chapter of the Gospel according to Saint Luke.

And so forth. Mna is a reduction of mina but was used by Pliny, who presumably took it directly from the Greek μνᾶ. A μνᾶ was 100 δράγμαι (and, no, I don't recall why the gamma changed to or changes to a chi). Anyway, I thought mna was an interesting word.
The other two words of the day are simply place-names, one of which I had previously encountered, Hemeroscopium, and the other which was news to me, Albintimélium, although you'd think Asti would show up more than once in the Martyrology and perhaps it has but I've not taken any especial notice-- Secundus of the Theban Legion is not a saint I have a particular devotion to.
Hemeroscopium is Denia in Alicante, which appeared just the other day (although 'just the other day' may be a week ago-- other martyrs of the 1936 persecutions were named, I reckon, and there are an awful great lot of them), which town is also called Artemisium Dianium for reasons I won't speculate about. So far as I can tell, hemeroscopium would be 'a place from which watch is kept during the day'; the Greek is ἡμεροσκοπεῖον.
Wikipedia proves itself to be truly useful, although of course one takes many assertions there cum grano salis. I don't see any reason to cavil about any of this, however.

Hēmeroskopeion (Ἡμεροσκοπεῖον) was an ancient Greek city. Its location is unknown but it has been suggested by some scholars that it existed where the city of Dénia in the province of Alicante, Spain, is now. Its name means watchtower in Greek and it reflects the first use of the lofty promontory as such. According to Strabo, it was a small city and was founded by the Massaliot Greeks together with another two neighbouring and equally small cities, the names of which have not survived. The city was later conquered by the Romans and it was named Dianium, whence the modern name. This town was situated on the cape then called Artemisium (Ἀρτεμίσιον) or Dianium (Διάνιον), named from a temple of Artemis Ephesia built upon it.

In any event, it was the city where the Blessed Pedro Mas Ginestar, priest of the Order of Friars Minor Capuchins, was martyred by the lackeys of the Revolution in Spain on 26 August 1936, whose feast is therefore celebrated tomorrow. 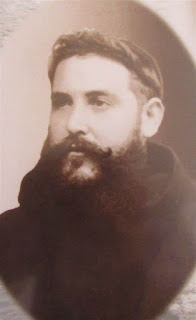