The feast of the Transfiguration of Our Lord Jesus Christ on Mount Thabor...

Celebrated today is originally a Byzantine feast, taken up in the Latin West at Rome in 1456 to commemorate the defeat of the Turks at Belgrade on this date, in the Pontificate of Pope Callixtus III; which is not to say that the feast hadn't already been celebrated elsewhere long before 1456: Rome in matters liturgical is very conservative (or has been before these last couple of decades), as befits the Mother and Teacher of all the churches.

I was up at 0145 for the streaming of Holy Mass from Saint-Eugène but of course it had begun at 0030, tsk; the older I become the less able I am to deal with variation, ha. The video is infra, the livret is here.

M. Grodziski did indeed commemorate Our Lady's First Saturday at Mass, although the orations were not printed in the libella. In these days when the lackeys of the Congregation for Divine Worship and the Discipline of the Sacraments seem preoccupied with examining parochial bulletins for notices about the Traditional Mass one cannot be too careful, I reckon.

The Gradual Speciosus forma prae filiis hominum is from one of the Christmas Masses, and the Alleluia seems to be proper to today. 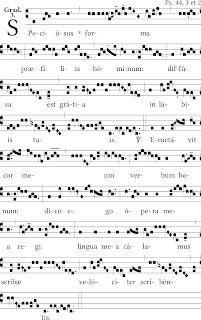 Candor est lucis aeternae, speculum sine macula, et imago bonitatis illius, that is, Wisdom in Solomon's book, 7,26, the brightness of eternal light, and the unspotted mirror of God's majesty, and the image of his goodness. A very beautiful verse. 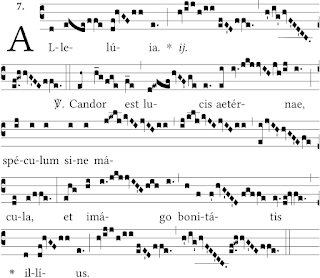 The hymn Christe qui lux es et dies, in use in France since the 5th century as witnessed by Saints Caesarius and Aurelianus of Arles, was sung in the plain-chant parisien at the incensing of the altar. And the O nata lux et lumine of Blessed Peter the Venerable, Abbot of Cluny, was sung at the end of Mass.