The curve of the Moon's smile has been speedily rising in the East but...

I think she won't be visible for much longer, at least not to my poor eyes, since Phoebus also is riding higher and higher: another brilliant morning. It's still just barely in the 50s, and I think predicted not to rise beyond 90; we shall see. Today is the feast of the holy Apostle Saint Bartholomew, who was flayed alive in his martyrdom for Our Lord. The first responsorium at Matins earlier:

Victoria wrote this for a different Apostle-- the doubting one, Saint Thomas-- but, eh. It is time for my toast and a second cup of tea.

The Introit for Saint Bartholomew's Mass is Mihi autem nimis. 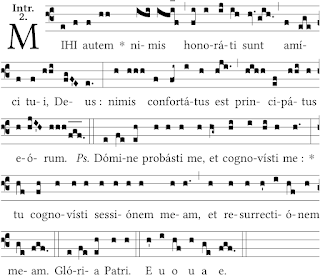 The Gradual and Alleluia. 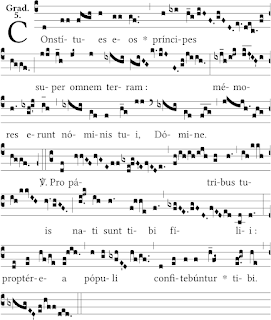 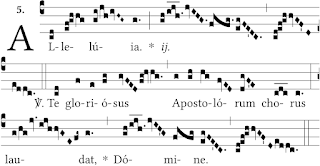 The antiphona ad Offertorium, the text again from Psalm 138. 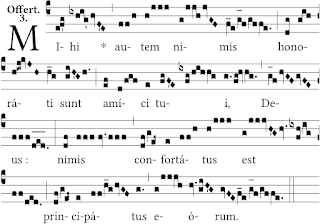 The Communion antiphon is Vos qui secuti estis. The Neumz folks chose this antiphon to mark the feast.

"... As for the melody, this piece, composed in mode 2, is a fairly simple Communion antiphon. The melodic movement begins with a forceful affirmation; after the initial virga strata of the D the melody rises, enveloping everything in a luminous joy that is amplified and intensified in super sedes, the high point of this chant, at which point the melody settles on the G, above the dominant F, highlighting the reward granted to the apostles: to occupy their seats as judges." 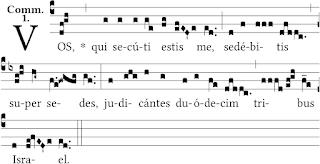 And as I was hunting about for the Vos qui secuti estis, I stumbled upon this recording of a concert performance in honor of Saint Bartholomew's feast from a number of years ago, featuring Palestrina's Missa Sine nomine, the proprium in plainchant, works of Francisco Guerrero and Giovanni Croce, and ending with Palestrina's Alma Redemptoris Mater.