Quite overcast this morning although the prospects of any rain...

Remain negligible. It still 'officially' (according the weather mages) six minutes before sunrise, however. Today is the Vigil of the feast of Saint Laurence, Roman deacon ('archdeacon', as the Martyrology calls him), who was put to death on the famous gridiron in 278. The Gospel at Matins was from the 16th chapter of Saint Matthew beginning, Dixit Jesus discípulis suis: Si quis vult post me veníre, ábneget semetípsum, et tollat crucem suam, et sequátur me. I haven't looked at the Mass texts yet. Louise Adler is singing Strauss's Vier Letzte Lieder at the Proms today.

Am off to make the second cup of tea and toast.

Almost, well, ten minutes, until 1000; still overcast and the weather mages all say it will remain overcast for the duration. Hmm. A high temperature of 85 degrees F. later on with the high declining by a few degrees throughout the rest of the week. The Mass is Dispersit, dedit pauperibus. But M. Grodziski is saying the Mass Mihi autem absit gloriari of Saint John Vianney, with a commemoration of the Vigil (i.e. the Vigil's orations are added after those of the Mass of Saint John). Hmm. I wonder if I am going to re-run the video from yesterday's Mass at Saint-E. to see what was said then, ha; perhaps not. In any case, I noted the propers of the Mass Mihi autem absit gloriari yesterday so will today continue with the propers of the Vigil which is, at least, being commemorated.

Reflecting, I had understood that the Vigils were suppressed by Pius XII in 1955. Hmm, yet again. Dr DiPippo at New Liturgical Movement says-- I skimmed very quickly-- that Saint Lawrence kept his Vigil through Ioannes XXIII's nonsense, even gaining 1st Vespers [I misunderstood: it is the Vigil itself that has its proper Vespers, for some reason]; but I will catch up over there later on. Now as the Sanctus bell begins to ring I will attend to the celebration of Holy Mass.

This is specially appropriate to Saint Lawrence, since he was responsible at Rome for the distribution of alms to the widowed, disabled, and poor. 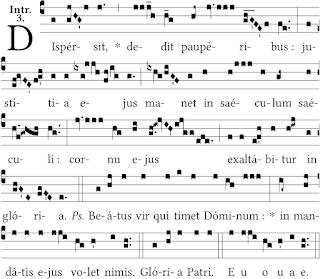 The Gradual, also the text Dispersit, dedit pauperibus. There is no Alleluia because it is a Vigil Mass; there would be a Tract, were we in Septuagesima or Lent. 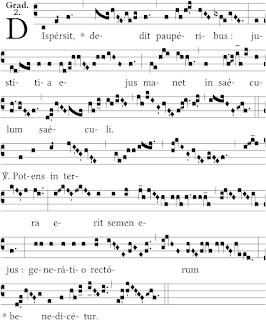 Verse 2 (potens in terra erit semen eius generatio rectorum benedicetur) is sung in the recording, as the text shows. 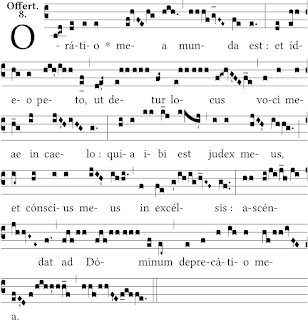 And, finally, the Communion antiphon.

Now to see if there are recordings of any of these at YouTube; none that I could find, anyway, of the Introit or the Offertory. Am off to read up at NLM on Saint Lawrence's feast itself et cetera. Phoebus is shining through the lingering shredded clouds so at this point I can believe the mages' predicted 85.