Quiet broken only by squirrel feet pinging on the metal trash can lid as they cross from the tree to the lawn where the peanuts are, and the whirr of the Steller's jays' wings as they land. And the sounds of various bushtits, wrens, towhees, and doves. (This is not literally true because if I listen I can hear the traffic on Coburg Road a mile off. But I pay no attention to it.)

After Prime I fussed about in the kitchen, preparing a cinnamon cake with apples and honey for the oven. Very much an ad hoc combination of a Betty Crocker mix on sale at the supermarket and the fruit hanging from the tree in the back yard and my ingenuity (ha), the next 20 minutes or so will tell whether it worked.

The Mass today is (or, it ought to be according to my reading of the books et cetera) either of two options: the priest at Saint-Eugène could choose the Mass for Saints Tiburtius and Susanna, Salus autem iustorum a Domino, or he could repeat the Mass of Sunday, Ecce, Deus adjuvat me (because in Ioannes XXIII's Kalendarium it is a feast of the lowest grade, a 4th class feast, so effectively 'optional').

(The Octave of Saint Lawrence is or was an octave simplex, meaning that there is no commemoration in the Hours of the Office or at Mass throughout the week, only on the day of the Octave itself. (For what it's worth, in both the 1570 and 1910 versions of the Office given at Divinum Officium, the Office was of the Octave with commemoration of the Martyrs; it is evidently too much for my poor head to keep track of these variations, both ha and alas.) Although, now that I'm thinking about it, in Ioannes XXIII's scheme of things maybe one could say the Mass of Saint Lawrence on a day when otherwise a 4th class feast is celebrated, as in 1939 when, according to the ordo I have, 'a private Mass (i.e. one that is not a conventual etc Mass) of Saint Lawrence is permitted today'.

Complicating matters is that at some point the Mass of the Holy Martyrs used to be Intret in conspectu tuo (in the 1920 Missal I have it is at that point already Salus autem i.e. I don't know when Intret was replaced; probably when Pius X was fussing with the Liturgy in 1911-1912). I will have to turn the volume up to 50 to be able to hear which Introit M. Grodziski is praying-- although whether his vestments are green (for Sunday) or red (for the feast of the Martyrs) should narrow the choices to at most the two, either Intret or Salus autem.

The baking experiment went well, in so far as the appearance goes. My estimates about the number of apples and quantities of butter and honey seem to have been good ones; the proof is in the pudding, the adage has it. The Introit Ecce, Deus adiuvat me of the 9th Sunday post Pentecosten since this is the least likely option at Saint-E. 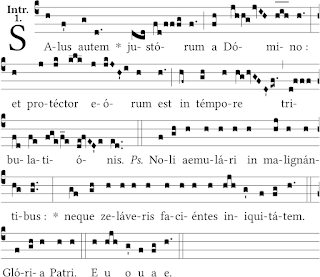 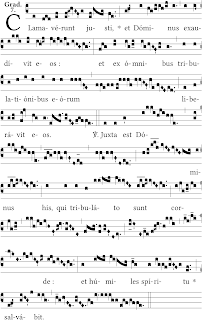 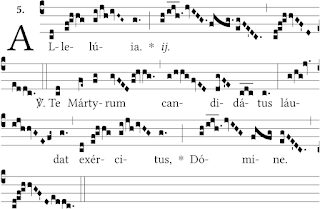 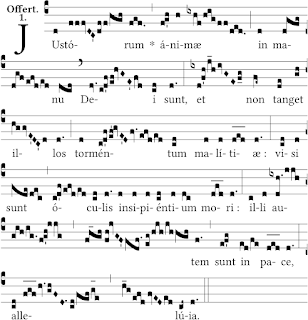 And the Communion antiphon is Quod dico vobis in ténebris. 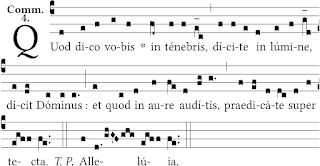 It is the Gospel according to Saint Matthew, 10,27: Quod dico vobis in tenebris dicite in lumine et quod in aure auditis praedicate super tecta, as Mons Knox put it, 'what I have said to you under cover of darkness, you are to utter in the light of day; what has been whispered in your ears, you are to proclaim on the house-tops'.