A lovely great storm of lightning, thunder, and hail...

Passed overhead at about 2100 last night for the feast of Saint Lawrence-- the clouds seemed quite low and the lightning very near. The hailstones were more or less walnut-sized or perhaps crab apple-sized or, perhaps, rather smaller but they certainly seemed to be quite solid ice, not at all slushy: the din on the roof was louder than I've heard it to be in previous hailstorms. The poor dog was terrified. The small, newer one, the landlady's more recent 'acquisition', hasn't come out of her room since the storm began. Which is fine by me since its toenails click, click, click as it walks, a too frequent reminder of its habitation here, and it tends to be the first to begin barking at phantoms. A forceful shush quiets the older, more intelligent and experienced animal; the little one is immune to my instructions, verbal or aural.

It is to be hoped that whoever celebrates Holy Mass later on at Saint-Eugène does indeed use the proper Mass for Saint Lawrence,  Conféssio et pulchritúdo in conspéctu ejus. 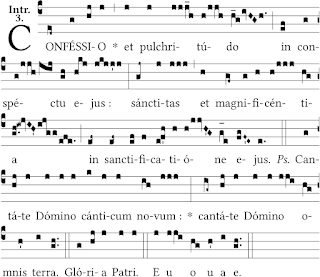 This seems to be proper to Saint Lawrence in the sense that it is used for no other feast.

Having returned from a walk and the supermarket shopping (butter is on sale for $1.71 per pound-- I thought we were in the midst of a shortage of dairy products-- and two pounds of good Tillamook cheddar is on sale, too, for $10), I can report that it is still overcast and probably not even 70 degrees yet but it is humid, 90% the one coven of weather mages says. Perhaps $1.41.

I saw earlier that the Neumz folks, who stream the daily Office from the Abbey of Nôtre-Dame de Fidelité at Jouques in France, chose to feature the Benedictus antiphon from Lauds In craticula and the Alleluia from Mass, which is identical in text anyway to what is used in the Traditional Rite. 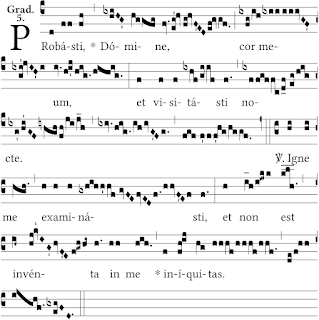 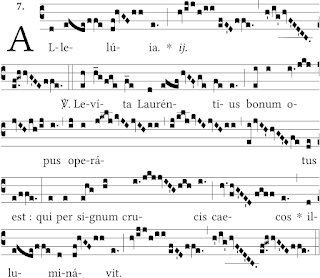 The alleluiatic verse alludes to the miraculous healing of the blind man Crescentius, worked by St Lawrence. While the deacon of Rome was dispersing Church goods, this blind man named Crescentius asked for healing by the laying on of hands. The holy deacon made the Sign of the Cross over him and the man began to see.

As for the alleluia chant, the melody is modelled on the alleluia, Laetabitur justus. In the verse, we note that the emphasis is on bonum opus operatus est (has accomplished good work), an accent of fervour that underlines the magnificence of St. Lawrence and develops on the high notes of opus and operatus in the happiest way. On the word crucis, at the beginning of the second phrase, the melody unfolds in the same ardent atmosphere. In the manuscript tradition, this song had a longer text: et thesauros Ecclesiae dedit pauperibus (and he gave the riches of the Church to the poor) in reference to the action that earned him martyrdom. 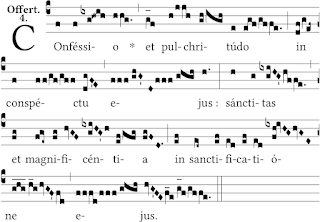 And the Communion antiphon is Qui mihi ministrat from the Common of Martyrs, this being the only part of the proper of today's Mass taken from the commons. 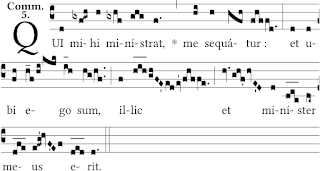 The laptop has still not completed its MS updating; I must have interrupted it during its precious process, tsk.