A grey early morning but at least the...

Last couple of days' rain has stopped. I got soaked last night walking back from the bus stop, after Mass (was afraid I'd wake up today with a cold but that didn't happen, D.g.). Today, the Kalends of May, was always the feast of the Holy Apostles Philip and James until the reign of Pius XII. He substituted the (new) feast of Saint Joseph Opifex, the Worker (although artisan in French renders the Latin better) on 'May Day' in what has proved to be a vain attempt to push the Communist 'May Day' out of mind. Father Hunwicke, the other day:

If Blessed Pius IX was inventive [he created the feast of Saint Joseph Spouse of the Virgin, Patron of the Universal Church], Venerable Pius XII was... let us say no more! In 1955, at the height of the Cold War, he had the brilliantly clever idea of stealing May Day from the lefties by restyling it as S Joseph the Worker. Like many brilliant ideas, it never made good. Right from the beginning, it was undermined by the American Bishops nagging for the right to observe it, instead, on their 'Labor Day'. It was such a flop that after the Council the coetus revising the calendar reduced it to an optional memoria.

Dr Eleanor Parker has translated from the Old English of the Menologion for May, the "only real Anglo-Saxon celebration of May" (with my emphasis):

[On 1 May] comes to the city
sweeping swiftly, splendid in its adornments
of woods and plants, radiant Þrymilce
to the dwellings; May brings many benefits
everywhere among the multitudes.
On the same day those noble companions,
Philip and James, brave thegns,
gave up their lives for love of the Lord.
And two nights afterwards God revealed
to blessed Helena the noblest of trees,
on which the Lord of the angels suffered
for love of mankind, the Ruler on the gallows by his Father's will....

The feast of the Invention (i.e. inventio, finding) of the Holy Cross, "the noblest of trees", by Saint Helena, the mother of the blessed Constantine the Great, is celebrated on Tuesday. Þrymilce is May. Dr Parker's Patreon page is here.

I elected not to get up at 0030, to fit most of Matins in before Mass in Paris. The video recording of Holy Mass at Saint-Eugène is infra.

Am sorry to have missed Gabriel Fauré's Ecce fidelis servus op 54, and the Gerson antiphon at the Communion; these begin at the 1:25 mark, more or less. Jean Gerson (among many other activities!) cultivated devotion to Saint Joseph in the 15th century at Paris and was responsible for the establishing of the feast of the Betrothal of Our Lady and Saint Joseph. 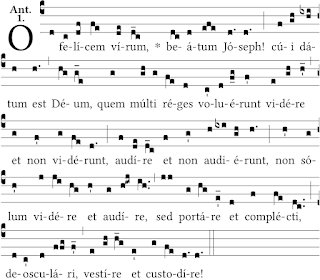 And the recording of Vespers, which I have been following-- it begins at 0845 Pacific Time-- even though Vespers and then Sext always seems a bit odd.