Today is Holy Thursday, Maundy Thursday, which re-presents pro nobis the evening in which Our Lord instituted the Most Holy Eucharist. 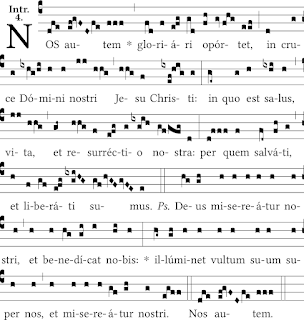 At Saint-Eugène, the bells have sounded at the Gloria, their last time until the Easter Vigil. The Schola is singing the Mass Exsultate Deo (1699) of François Cosset (c 1610-1673), maître de chapelle at Laon, Reims et Paris with Credo I. The libellum for the Mass is here.

And the antiphon Coenae tuae, from the Byzantine and Ambrosian Rites, adapted by M. de Villiers from the polyphony of Alexei Lvov (1798-1870, maître de la chapelle at the Imperial Court in Saint Petersburg). (He's written an article about this which alas I'm not reading this morning; later on, perhaps, but certainly in the Octave.) 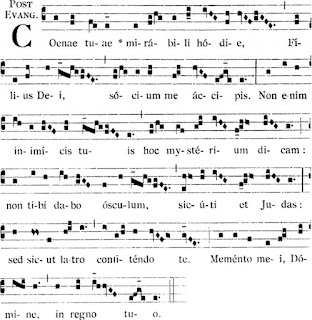 After Holy Mass is concluded, the Most Blessed Sacrament is carried in procession to the reposoir, where it will be kept until the Paschal Vigil, leaving the tabernacle of the High Altar empty and open. I don't recall offhand where this reposoir is made at Saint-E.-- generally, a side chapel with a fixed altar is used but where such things are lacking one improvises: but I know Saint-E. has side altars. During the procession, the Pange lingua gloriosi corporis mysterium (of Saint Thomas Aquinas, not Saint Venantius's Pange lingua gloriosi proelium certaminis) is sung, strophes of the polyphonic setting of Orfeo Vecchi (c 1550-1604, maître de chapelle of Santa Maria della Scala at Milan) alternating with strophes chanted.
Then the dépouillement of the High Altar is done; one says the 'stripping of the altar' in English, I think. Psalm 21 is recited, with the antiphon Divisérunt sibi vestiménta mea et super vestem meam misérunt sortem.
The Mandatum follows, which is renowned principally because the Ubi caritas et amor Deus ibi est is sung during it (or, in these latter days, because of the stupid nonsense-- than which nothing is more emblematic of the decadence of Holy Church-- over whose feet should or should not be washed during it). But (as the livret shows) other antiphons are (or can also be) sung, too.

I recall the rite of the Mandatum, in the chapter-house of the monastery, with fondness and even emotion; I don't remember that it has been performed in the past at Saint-Eugène.
Have been looking about. Pius XII, as with so much else, is responsible for the upsetting of the traditional order of things on Holy Thursday. As today at Saint-Eugène, the Mandatum was formerly celebrated after the Mass in a way that made clear that it was a distinct rite (e.g. kings and princes have performed this or that Maundy service; I believe William III, dead in 1702, was the last English (!) sovereign to actually wash the feet of thirteen chosen poor, or else I'm misremembering whatever Father Hunwicke actually wrote or quoted).
The dépouillement proceeds; the side altars are being stripped. We are at just over two hours.... And it is finished.
Am pretty sure that the streaming, at least, of the Mandatum is a novelty. The Gospel lesson (according to Saint John, 13,1-15) is being chanted recto tono. 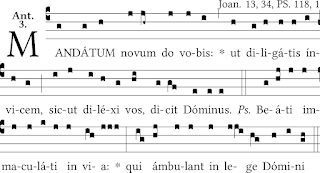 M. le Curé is actually giving each of the washed-feet-fellows a coin after he washes his feet, as is superbly traditional. But what sort of coin, I wonder; her Majesty of Great Britain gives specially minted pound coins. I will investigate (i.e. have asked on the Schola's Facebook page).
And Tenebrae of Good Friday follows....
LDVM
Alexei Lvov Domus Feria Va in Coena Domini François Cosset Guillaume Bouzignac Hebdomada Sancta Saint-Eugène-Sainte-Cécile