Today, Palm Sunday, Dominica in Palmis, begins Holy Week, the summit of the Church's year of grace, the annual re-presentation, as it were, of the accomplishing of our Redemption. I've already screwed up in that I lounged in bed instead of getting up immediately with the alarm, so Matin's final three lessons and their responsoria remain for after Mass at Saint-Eugène, tsk, along with Lauds; sigh. The livret for the Mass, which begins with the blessing of the palm branches and the procession, is here. 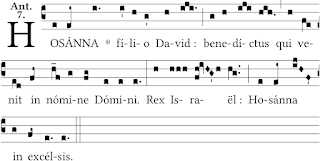 There are two lessons from the Holy Gospel today, one from Saint Matthew preparatory to the consecration of the palms and then the Passion, each with an epistle preceeding-- from Exodus now, and then from the Apostle's Letter to the Philippians before the Passion. Abbé de Labarre is the deacon of the Mass, I see; he was frequently at Saint-E. during Canon Guelfucci's tenure as pastor.

There is a preface sung, and the Sanctus, before the six orations over the palms. I ought to point out that, Deo gratias, Saint-Eugène continues to use the traditional rite for today (and presumably throughout Holy Week) as it existed before the ill-advised so-called 'reform' of Pius XII. This being the first Holy Week of Father Durodié's pastorate I had been apprehensive that this happy custom might be set aside.

These beautiful antiphons are sung during the distribution of the palms. 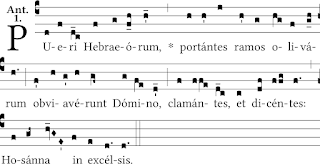 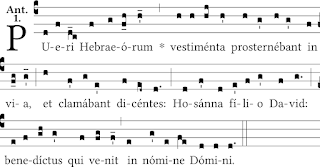 And also-- we shall see how long the distribution actually takes-- the setting of these by José Maurício Nunes Garcia (1767-1830), maître de chapelle at the cathedral of Rio da Janeiro, the Jérusalem acclame of Joseph Noyon (1888-1962), and the Lauda Jerusalem du Noël Darros († 1954), who was maître de chapelle at Lourdes.

When the distribution of palms is completed, then the procession will begin. At its conclusion, the Gloria, laus et honor of Theodulf of Orleans will be sung, and ceremony of knocking at the closed doors of the church with the foot of the processional cross will take place (it described on page 15 of the libellum).

Unfortunately, I don't believe that the 'technical department' (a few dedicated volunteers) at Saint-Eugène can stream video from outside the church. The doors have been closed.

The Attolite portas was beautiful. The TD managed to make both the principal celebrant and procession outside and the chanters inside the church audible this year-- macte virtute!

When once the procession has re-entered the church... then the Mass proper, so to say, begins with the Introit Domine, ne longe facias.

And it is at this point that I catch myself thinking, 'good Lord, over 70 minutes and we're only at the Introit-- with the chanting of the Passion still to come'. The Collect.

The French of Saint Paul's epistle, the Gradual and Tract, and then the Passion.

I had forgotten how lovely the proper chant of the Gospel concluding the Passion is; will try to remember to note the time in the video recording. (The final verses of the Passion, from Altera autem die, quæ est post Parasceven, are sung by the deacon of the Mass, after the Book has been incensed, in what I believe is a tone not used on any other occasion.)

During the Offertory, while the altar and people are incensed, the Schola is singing excerpts from Les sept Paroles du Christ of Théodore Dubois (1837-1924), maître de chapelle at La Madeleine. The cello and violins are certainly adding certain solemn splendor.

Three movements of the Stabat Mater of Giovanni Battista Pergolesi (1710-1736) at the Communion, before the proper.