And such a bright morning here, too, after a couple of days of early morning cloudiness. The Mass today is Victrícem manum tuam. 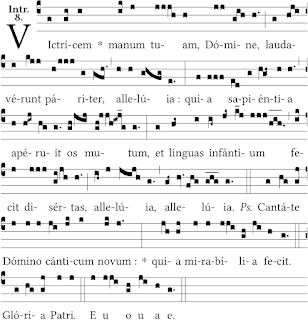 The Lesson is from the 8th chapter of the Actus Apostolorum, recounting the encounter of the Apostle Philip with the eunuch of Candace, queen of the Ethiopians. The Gradual and Alleluia follow this. 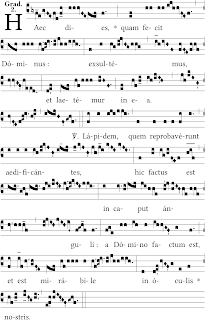 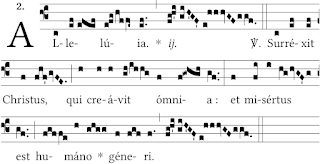 And the Victimae paschali laudes.

The Gospel is from the 20th chapter of the Apostle Saint John. From Dom Prosper Guéranger's Année liturgique (which I think to include because Father Hunwicke mentioned Dom Prosper's essay this morning).

Today’s Station is in the basilica of the twelve Apostles; and, instead of putting before us any of the apparitions related by the Gospel as having been made to His Apostles by our Saviour, after the Resurrection, the Church reads to us the one wherewith  Magdalene was honoured. Why thus apparently forget the very heralds and ambassadors of the New Law? The reason is obvious. By thus honouring her, whom our Lord selected as the Apostle of His Apostles, the Church would put before us, in their full truth, the circumstances of the day of the Resurrection.

God is all-powerful, and delights in showing Himself in that which is weakest; He is infinitely good and glorious in rewarding such as love Him. This explains how it was, that our Jesus gave to Magdalene and her companions the first proofs of His Resurrection, and so promptly consoled them. They were even weaker than the Bethlehem shepherds; they were, therefore, the objects of higher preference. The Apostles themselves were weaker than the weakest of the earthly powers they were to bring into submission; hence, they too were initiated into the mystery of Jesus’ triumph. But Magdalene and her companions had loved their Master even to the Cross and in His tomb, whereas the Apostles had abandoned Him; they therefore had better claim than the Apostles to Jesus’ generosity, and richly did He satisfy the claim.

Let us attentively consider the sublime spectacle of the Church receiving the knowledge of that mystery, which is the basis of her faith, the Resurrection. After [the Blessed Virgin] Mary, in whom the light of faith never waned, and to whom, as the sinless Mother, was due the first manifestation, who were the first to be illumined with that faith, whereby the Church lives? Magdalene and her companions. For several hours, this was the ‘little flock' on which Jesus looked with complacency: little, indeed, and weak in the world’s estimation, but grand, as being the noblest work of grace. Yet a short time, and the Apostles will be added to the number; yea, the whole world will form part of this elect group.

The Church now sings these words [in the Victimae paschali laudes] in every country of the earth: 'Tell us, Mary! what thou sawest on the way!’ And Mary Magdalene tells the Church the mystery: 'I saw the sepulchre of Christ, and the glory of Him that rose.’

Nor must we be surprised, that women were the first to form, around the Son of God, the Church of believers, the Church resplendent with the brightness of the Resurrection: it is the continuation of that divine plan, the commencement of which we have already respectfully studied. It was by woman that  the work of God was marred in the beginning. He willed that it should be repaired by woman. On the day of the Annunciation, we found the second Eve making good by her own obedience the disobedience of the first; and now, at Easter, God honours Magdalene and her companions in preference even to the Apostles. We repeat it: these facts show us, not so much personal favour conferred upon individuals, as the restoration of woman to her lost dignity. 'The woman,' says St. Ambrose, was the first to taste the food of death; she is destined to be the first witness of the Resurrection. By proclaiming this mystery, she will atone for her fault; therefore is it that she, who heretofore had announced sin to man, was sent by the Lord to announce the tidings of salvation to men, and to make known to them His grace.’

The Offertory and the Communion antiphons. 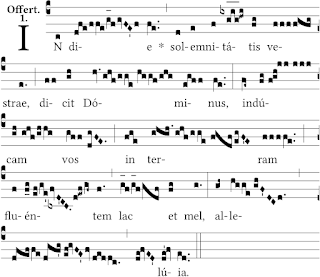 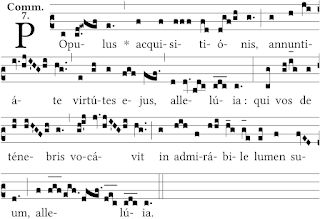 And the Regina caeli laetare is chanted during the Last Gospel. Dr Ratovondrahety has been performing splendid improvisations at the end of these Masses of the Octave.

I don't recall ever listening to any of the works of Gregor Aichinger (1565-1628); English Wikipedia and the more extensive German. There are on Spotify only three different pieces: three recordings of Regina caeli, one of Ave Regina caelorum and one of Factus est repente for recorder. It's lovely, his Regina caeli, so am supposing that he is one of those pleasant, competent composers who hasn't been 'rediscovered'.
The video recording of the Mass. I suspect that I have neglected more than once to add these (from the YouTube Ite Missa est channel) to the appropriate blog post but am not going to take the time to rectify these omissions.
LDVM
Domus Dr Touve Ratovondrahety Feria Va infra Octavam Paschae Gregor Aichinger Octava Paschalis Saint-Eugène-Sainte-Cécile