The neighbor did delay using his chainsaw...

Until just before 0900, which I appreciate; it's been light enough to use the noisy thing since seven-ish. I can't tell from this angle (from my little room's window) whether the entire tree came down or if it only received a significant trimming.

It is about time-- am aiming for half past the hour-- for the Fatima prayer; 1100 on the East Coast marked the beginning of the act of penitence at Rome, so I figure an hour of that, more or less, what with the ceremonial to-ing and fro-ing. Today is a day I would have gone downtown to Holy Mass were it not for the fact that (three priests, ahem...) there is only one public Mass and that after noon-- in other words, it is too much bother for me to walk to the bus, endure the bus, walk to church, endure the bus, and walk back here. 3.5 hours of my day, at least, and right in the center of it.

Vultum tuum is the Introit for today's Mass, I believe.

Oregon Right to Life received $1235 from Amazon, that amicus humani generis, in the last quarter. And some $13k since the beginning of its 'Smile' program; frankly, I would prefer that A. reduce the prices I'm charged by 1% or whatever and allow me to distribute largesse as I see fit. On the other hand, I'm sure it gives someone at A. heartburn or even palpitations to realize that there is corporate money going to the evil right-to-lifers-- so $1200 of good and that.

I notice that it is the 'Année Franck' at Saint-Eugène, the composer César Franck having been born in 1822-- his bicentenary in fact. An Ave Maria of his will be sung at the Communion; haven't read M. Vardon's posts at Liturgia yet.

The Tractus was sung as near perfectly as anyone could want. 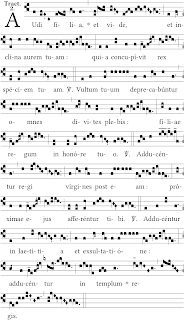 At the Offertory, Guillaume Bouzignac's Ave Maria, his scène sacrée for the Annunciation.

Fr Durodié is reading the act of consecration made by the Sovereign Pontiff at Rome. It is interesting to compare Pius XII's and Franciscus's, ahem.