Remember Thy compassion, Lord, and Thy mercies, that are of old... 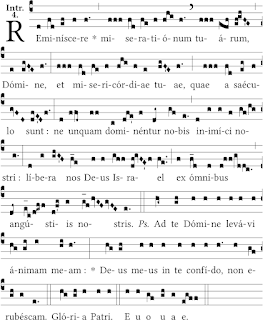 Had a difficult time rousing myself from bed earlier and so missed the singing of Reminiscere, tsk, and have barely heard much until now, when Père Grodziski is sermonising (and, obviously, am not making even an attempt to follow his preaching).

As I age, I find that I need the practicalities arranged and accomplished in their right order on waking, lest I suffer a certain fogginess; this isn't that which will often accompany being roused from a sound but insufficient sleep when one is tired (I can scarcely ever be actually tired these days, can I, when my heaviest physical labor is the daily walks) but it's a close cousin to it. Instead of congratulating myself on the Lenten fast (were I to do such a thing, ahem, in spite of the Lord's explicit warning against such nonsense) I ought to concentrate perhaps on more carefully getting out of bed without hesitation in the mornings, once the alarm sounds.

Quite lovely and really appropriate in its sentiments during the Lenten season. I hope that the heart is keeping its vigil whilst my eyes are luxuriating in sleep! De Courbes's Cantiques spirituels of 1622 includes 37 pieces in French and Latin (and one in Greek, evidently). He seems to have been a member of that select circle of composers who were also tax accountants-- although 'tax accountant' is perhaps a mischaracterisation of his professional duties.

The Inter vestibulum and Parce Domine by Nicolas-Mammès Couturier at the Communion is 'growing on me'.
Post Primam. I returned here to add the video recording of the Mass; about to begin Our Lady's Prime, I found myself wondering why it was still so dark: 'even given the rain's clouds', I thought, 'it shouldn't be this dark'. Ah ha, the light dawned, happily enough not more than a second or two later.
LDVM
Charles de Courbes Dominica IIa Quadragesima Domus Nicolas-Mammès Couturier St-Eugène-Ste-Cécile