Today is the 4th Sunday in Lent, called Laetare, after the first words of the introit of Holy Mass. During this penitential season, the solemnizing of marriages is prohibited, as are flowers on the altars and the use of the organ during Mass. But the last two prohibitions are lifted today, and Dr Radovondrahety has obviously welcomed the relaxation. And the violet of the season is replaced by rose, as on Gaudete Sunday in Advent. 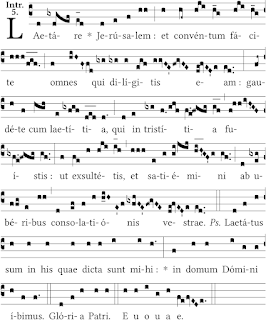 The tract is specially lovely; at Saint-Eugène, however, the Schola used faux-bourdon, the text of the proper chant sung in harmony-- this makes the singing less of a challenge and also renders the text more easily comprehensible to its hearers.

Am each year most moved by the conclusion of the lesson from the Gospel according to Saint John.

Our Lord, knowing that the people would come to take Him to make Him king, again fled alone to the mountain.
Saint Augustine, in the 8th lesson at Matins, remarked how the work of the divine Majesty in keeping the universe in existence is much greater than making a sufficient supply of bread and fish for a crowd but that men tend to be less impressed by greatness than by rarity ('non quia majus est, sed quia rarum est'); the sudden passions of the mob is a phenomenon well observed, also. M. Durodié is homilizing.
When Mass is ended, since I said Matins ante Missam I will progress to Lauds.
This Tantum ergo, sung at the Communion, is beautiful. The iPhone recording in this video gives a good idea of it.
Are les Veilleurs still 'a thing'? I presume so but alas haven't kept up with their actions in France; I have a difficult time keeping up even as much as I do with good and useful acts of witness here in the United States.