Holy Mass is streaming 'early' from Paris this morning... 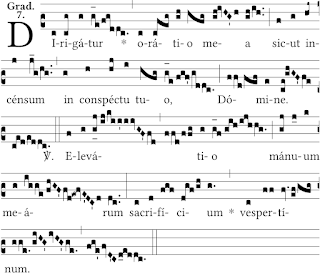 ... Which doesn't happen often; here, at 0030. The Saturday Ember Day rite is lengthy-- ordinations were traditionally celebrated on the Saturdays in the Embertides (the Wednesday and Friday Masses aren't even in the Liber usualis). I'm sure Blessed Ildefonso and Dom Prosper have plenty to say about this but I haven't gotten to those eminences yet.

By my count, there are seven lessons, including the Gospel (the Transfiguration of Our Lord related in the 17th chapter of Saint Matthew), four Graduals, a Tract, and the hymn Benedictus es, Domine, from the 3rd chapter of the Prophet Daniel (which is particularly lovely: it is a terrible mystery why it isn't incorporated somehow into the Pauline Rite).

The Gradual Dirigatur oratio is the one that stuck in my head; I imagine that it isn't a simple matter to sing it.

Must leave this now to say the Night Office, in the night for once instead of at 0400 or whenever.

The recording of the morning's Mass.