Am back from a second morning walk...

And, while it was cold during the first one, cold (certainly below the freezing point-- 28 or 29 degrees, even) and of course (at half past four) still dark, it's now bright and sunny with only a few wisps of cloud in the skies. I wore flipflops again this morning (earlier, I mean) to avoid pressure on the now healing blistery area on my right heel (and, also, to avoid having to do the bandaging business at such an early hour), as I did yesterday: yesterday's experience was simply a bit of odd (I never do wear flipflops out and about, not any farther than the mailbox, anyway) whereas today's was 'eh, my toes are frozen!'.

Happily, the good people at Saint-Eugène are streaming Holy Mass tomorrow and Saturday, the remaining Ember Days of this Lenten season. It is also the custom, on the Friday in the first week of Lent, in particular churches, to celebrate the feast of the Holy Lance and Nails which pieced Our Lord in His Passion. While I'm familiar with this feast, I knew nothing about the Saint Mors de Constantin before reading at the blog Maître-Chat Lully. The story is that the Emperor Constantine, given one or more of the Sacred Nails recovered by his mother Saint Helena, made one of them into his battle horse's bit, which relic is conserved in the Cathedral of Saint-Siffrein at Carpentras, capital of the Comtat Venaissin. Let's see if this image (which I'm 'borrowing' from Fr Maximilien-Marie's blog...) copied well. 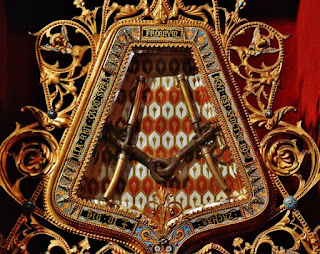 I have to admit being a bit intrigued how that bit would have worked-- it is apparently how such pieces of equipment were back in the 4th century-- my knowledge of horsemanship is limited to the admonition, 'never ride a horse you don't know how to control, lest it carry you rapidly into its stall, the door of which is barely high enough for the horse itself to pass under'. Time for Sext.