A blessed and happy feast of Saint Benedict to all...

And may his powerful intercession be sought for the end of the Russian invasion of Ukraine and a satisfactory resolution of the issues that made it seem a good thing to Vladimir Putin et alii.

I said Matins and Lauds from the Benedictine books but have reverted to the Roman for the remaining Hours.

The only reason I came here was to register my delight that Durandus, in his Rationale (written in the 13th century), can prose on about today's Mass-- it then being In Deo laudabo verbum-- and it is today's Mass still. 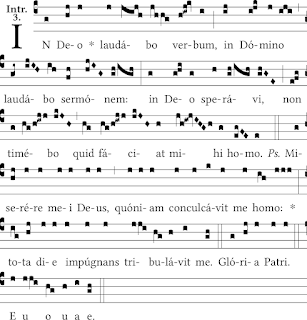 Durandus notes that-- it must be recalled that in the Epistle, the Prophet Eliseus commanded the barbarian Naaman to bath three times in the waters of the Jordan River so that God would heal him of his leprosy, foreshadowing Our Lord's Baptism and the Sacrament etc--

More or less. No idea why the third Gregorian tone-- notice the three beneath the abbreviation of introitus in the top left hand of the image-- is considered to totum contingit unless it is that three is considered to be the perfect number because of the Most Holy Trinity but, eh. I wonder if there is a recording at YouTube... apparently not; but there is of the entire Mass, from the Brighton Oratory last year.