On the first Sunday in Lent, at least it was earlier-- this is about the time that the carousers exit the closing taverns and there's usually more automobile noise. The Introit is Invocabit me.

Let's see if this works. 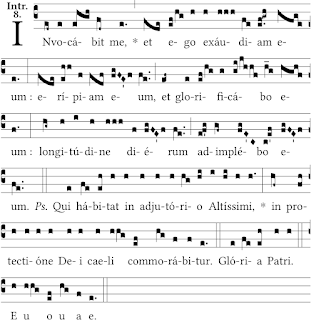 Wonderful (thanks to GregoBase), as was the chanting of the Kyrie, XVII Salve. The lesson today is from the 2nd Epistle of Saint Paul to the Corinthians, 6,1-10 (and this was also the first lesson at Matins, continued through verse 16 in the second; the third was the beginning of the 7th chapter). The Gradual and Tract together go on for almost four entire pages in the Liber Usualis; the Schola is singing the lengthy Tract Qui habitat in faux-bourdon according to the Paris custom (from an edition of the chant of 1739)-- relieving the principal chanters from a risk of vocal exhaustion (and in fact the harmonisation is lovely). The Qui habitat is a fine morning's challenge even for professional singers. I'll listen to the nuns at Jouques later on; as it happens, the Angelis suis and Qui habitat are retained in the Pauline Rite (or, at least, in the Benedictine use at Jouques). Fr Grodziski is homilizing.

The Schola sang the motet O bone Jesu of Marc'Antonio Ingegneri after the homily.

The Offertory is Scapulis suis obumbravit tibi from Psalm 90 (which text is also sung in the Communion).

And is singing Lassus's setting of the Offertory from 1581, after the proper chant-- there doesn't seem to be a recording at YouTube, however. Beautiful.

I'm listening to Nicolas-Mammès Couturier's Miserere at Communion and the rest but must then get to Lauds (only made it through Matins before the Saint-E. streaming began). The Attende Domine is sung at the end of the celebration of Holy Mass, as (if I'm remembering correctly) it is each Sunday (or, most Sundays, perhaps) in Lent.