Today is the feast of the Nativity of Our Lady...

on September 08, 2021
Beginning here in the quiet darkness earlier for Matins and Lauds, and still in darkness now, some hour and a half before Dawn stretches out in the eastern skies. The Mass of the feast is Salve sancta Parens (Introibo); the Catholic Encyclopedia article is here, the Wikipedia page, here ("the modern canon of Scripture', indeed, pft). Holy Mass is streamed from Saint-Eugène at 1000. With M. Durodié being newly installed as pastor I had wondered about potential changes, although I reckon that even a just decent pastor wouldn't begin doing nonsense in his first week. But I see two proses and other lovely works of music on the program so am reassured about the new regime.
Ante Tertiam. A lovely walk earlier; the day ought to be bright and sunny until dusk comes. I pay very little attention to Facebook but do look there every morning at the three groups I belong to; one reads about so many details of the history of the Liturgy in a couple of them (it is probably a stretch to say 'learns', since I doubt I recall this or that a week after reading about it). There is, e.g., a custom "in only three Offices according to some medieval Uses, those of the Trinity, St Paul and St Lawrence, by which a long neume is added to the antiphon when it is repeated at the end". I don't clearly understand what Dr DiPippo means there but it is intriguing. 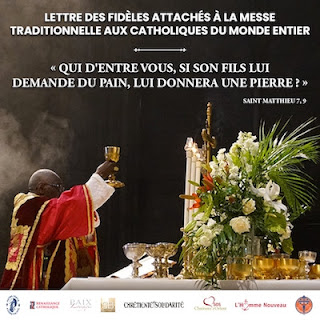 What father, if his son asks him for bread, will give him a stone? (Mt 7, 9)
Dear Brothers and Sisters in Christ,
It is with great sadness that we learned of Pope Francis' decision to abrogate the main provisions of the Motu Proprio Summorum Pontificum, promulgated by Pope Benedict XVI on July 7, 2007. After decades of divisions and quarrels, that Motu Proprio was, for all the Catholic faithful, a work of peace and reconciliation.
Rome violates the word given by Pope Benedict XVI with brutality and intransigence, far from the much vaunted fraternal welcoming.
The explicit will of Pope Francis, stated in the Motu Proprio Traditionis Custodes, of July 16, 2021, is to see the celebration of the Mass of the Tradition of the Church disappear. This decision drives us to great dismay. How can we understand this rupture with the traditional Missal, a “venerable and ancient” actualization of the “law of faith,” which has bore fruit through so many nations, so many missionaries, and so many saints? What harm is done by the faithful who simply want to pray as their ancestors had done for centuries? Can we be unaware that the Tridentine Mass converts many souls, that it attracts young and fervent assemblies, that it arouses many vocations, that it has given rise to seminaries, religious communities, monasteries, that it is the backbone of many schools, youth groups, catechism activities, spiritual retreats, and pilgrimages?
Many of you, Catholic brothers and sisters, priests, and bishops, have shared with us your failure to understand this and your deep sorrow: thank you for your many testimonies of support.
To promote peace within the Church, in order to build unity in charity, and also to lead Catholics to reconnect with their own heritage by making as many people as possible discover the riches of liturgical tradition, the treasure of the Church: those were the goals pursued by Summorum Pontificum. Pope Emeritus Benedict XVI witnesses his work for reconciliation destroyed during his own lifetime.
In a time steeped in materialism and torn by social and cultural divisions, liturgical peace appears to us as an absolute necessity for the Faith and for the spiritual life of Catholics in a world that is dying of thirst. The drastic restriction of the authorization to celebrate Mass in its traditional form will bring back mistrust, doubt, and it heralds the return of an agonizing liturgical war for the Christian people.
We solemnly affirm, before God and before men:
We will not let anyone deprive the faithful of this treasure which is first of all that of the Church.
We will not remain inactive in the face of the spiritual suffocation of vocations laid forth in the Motu proprio Traditionis Custodes.
We will not deprive our children of this privileged means of transmitting the faith which is faithfulness to the traditional liturgy.
As children to their father, we request Pope Francis to reverse his decision, by abrogating Traditionis Custodes and restoring full freedom to celebrate the Tridentine Mass, for the glory of God and the good of the faithful.
Bread rather than stones.
On the feast of the Nativity of the Blessed Virgin Mary, 8 September 2021