It must have been something I ate...

Went to sleep at about 2200 and couldn't go back to sleep after the Office at 0330, so I just got up, tsk. It wasn't at all anything I ate of course: it had to do with the heat and with too much caffeine yesterday; which is, I supppose, 'something I ate' in the broadest of senses. Today is the feast of the great 18th c doctor ecclesiae Saint Alphonus de Ligouri (Introibo, CE, Wiki). That of the Martyr Pope Saint Stephen I is commemorated.

Marc-Antoine Charpentier's Filius prodigus H 399 since neither of the Introits seem to be at YouTube. It is fitting also since Saint Alphonus is such the clever and compassionate doctor of the moral law.

Today is also the Indulgence or Pardon of the Portiuncula, a gift of Saint Francis, however complicated the history is, ahem. Johann Friedrich Overbeck's painting commemorates one of the miracles of Saint Francis who, doing penance, rolled in thorny bushes only to have them become thornless roses. 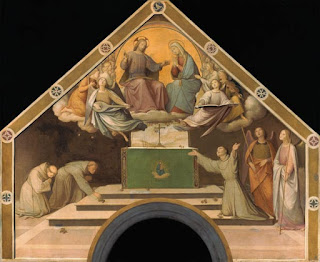