Dawn dressed in a bit more of her finery this morning...

Which may mean... I haven't looked at the mages' page yet, ha. I was late-ish to the Office, and then, in the middle of my shower, recalled that I had wanted to listen to a livestream from Dr Aurelio Porfiri (including Cardinal Zen, Dr Rao, Dr Bogle, Dr Alanis Suarez et al) at 0600-- so I clicked in there rather late. Tsk. It is the feast of Saint Jean-Baptiste-Marie Vianney (Introibo, CE, Wiki) and the Vigil of the Roman Saint Lawrence, Archdeacon and Martyr (Introibo, CE, Wiki).

It is sadly ironic that John XXIII moved Saint John's feast back to the 8th in 1960 so that we would be able more enthusiastically celebrate the Vigil and feast of Saint Lawrence-- which vigil is of course suppressed entirely in the Kalendar of the Pauline Rite. The following is from a 2018 article at New Liturgical Movement by Dr Gregory DiPippo.

The 1960 reform of the Breviary added to the vigil of St Lawrence a completely anomalous feature, something which had never existed before, and does not exist anywhere else; it is the only vigil that has Vespers. A vigil is a separate liturgical observance from its feast, and traditionally, all feasts began with First Vespers, and so a vigil by definition ended once None and the Mass were celebrated. In 1960, however, all the feasts of St Lawrence’s rank lost their first Vespers.  His vigil somehow managed to survive the massacres of 1955 and 1960, but as the only vigil attached to a feast with no First Vespers. In order to cover the gap between the vigil and the feast, which now begins with Matins, the vigil was extended to include Vespers; these consist of the regular Office of the feria, but with the Collect of the vigil. For no discernible reason, the series of versicles known as the ferial preces, which are characteristic of penitential days, are omitted from all the vigils in 1960.

Will borrow this image from Maître Chat Lully, with many thanks. 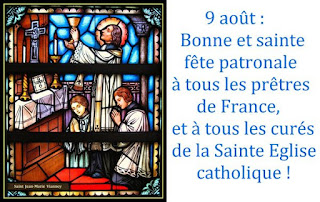