A lovely quiet Dawn and another beautiful morning...

It is the feast of Saint Anacletus, pope and martyr (Introibo, CE, Wiki)-- who, it seems to be more or less agreed in these latter days of scientific and inerrant historical study, is identical to Pope Saint Cletus; in any case the second Successor to Saint Peter. Linus, Cletus, Clemens... he is named in the Canon, and while today's feast was suppressed from the Roman Calendar by John XXIII, the feast of Saints Cletus/Anacletus and Marcellinus on April 26th remained until the imposition of the Pauline Rite and its Calendar.

Dr DiPippo posted this morning at New Liturgical Movement a review of today's feast and the several others that occur this week.

Time for Prime whilst the Chopin Competition's morning session is having its intermission.

Ante Tertiam. Sigh. Rorate Caeli is reporting that its source says the papal decree doing something or other to Summorum Pontificum "is signed and is expected to be promulgated this Friday".

Ante Nonam. Am enthused about the Flammenorgel, the pyrophone, invented by Frederik Kastner in the 19th century. 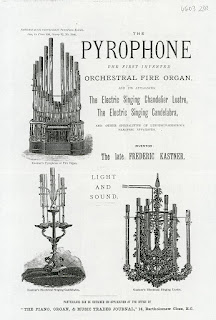 People on Twitter were discussing the pronunciation of the word 'calliope' (4 syllables or 3?-- the OED recognises the second US English pronunciation with 3) and so I looked at the Wikipedia page, whence to half an hour on the pyrophone. The music that the pyrophone makes is, sadly, unimpressive: but the idea of using fire and pipes to make music isn't at all.