Am arguing with the dog over his barking...

The landlady's dog seems to think that the dog barking three houses away is communicating with him somehow-- may well be the case, I suppose. There is also a second dog three houses away and a third two houses away. The dog seems also to believe that it is necessary to bark at people walking by on the street, at cats going peaceably about their business outside, and so forth. I have managed to impress upon his canine brain that when I, how to describe this, growlingly shush him and point fiercely at him he needs to be quiet: and it does work, reducing him, at this point, to a second or two of growls and then silence. It is quite tiresome to have to interrupt myself ten times a day to command the dog to silence; still, at this point I can shush from my desk (through the closed door! which illustrates the shoddiness of the fabric here) as he runs from the living room window to the back door and he takes the hint-- although only when he is not already intent on enjoying a paroxysm of barking. The landlady claims not to hear the barking; it is nearer to the truth to observe that she only cares when the episode has extended itself beyond the limit of some maximum period that is doubtless perfectly obvious to her.

Or when it is happening at two o'clock in the morning. She fell the other day when she had to go out to interrupt the dog's barking at 0230 or so, only to have to separate the dog from an opossum's hindquarters with the aid of a broom handle or perhaps the broom itself. My alarm for Matins went off as she was limping back to bed-- when I'm asleep I don't hear the dogs; I heard her grumbling to herself-- although I didn't hear about the combat until a week later. Deo gratias, the opossums have enough sense to stay out of the yard most all of the time. I would have liked to see the three of them at it, I must admit.

It is the feast of Saint Juliana de Falconeriis (Introibo, CE, Wiki); a commemoration is made of the feast of Saints Gervase and Protase (Introibo, CE, Wiki). In the older traditional calendar is a Saturday when the weekly Office of Our Lady is kept, with Saints Gervase and Protase being remembered at Mass, Lauds, and Vespers-- well, not at Vespers because at Vespers it is already tomorrow, the 4th Sunday post Pentecosten. At Saint-Eugène the day is Saint Cecilia's, with Charpentier's Messe à quatre choeurs being sung and Bouzignac's Te Deum, to mark the Schola's 20th anniversary etc; I don't know whether the proper of the Sunday or of Saint Cecilia will be sung; they are fussing with the program pdf which is in consequence inaccessible at the moment. Post Tertiam. It will be the Mass of Sainte Cécile with commemoration of the 4th Sunday post Octavam Pentecostes.

This is the beginning of Bouzignac's Te Deum. Folio 180r of what (I guess) is described as RES VMA MS 571 at the Bibliothèque nationale in Paris. The Te Deum is conspicuous by its absence from the very short list of certain compositions listed on the French Wikipedia page but such questions are (obviously) beyond me. 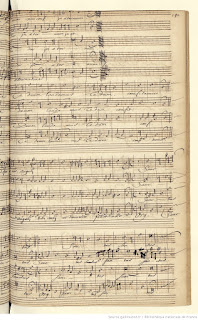 Post Sextam. On Spotify, I've only found the one recording of Charpentier's Messe à quatre choeurs, by the Ensemble Correspondances from 2020. The first video infra is Maestro Sébastien Daucé introducing the album that includes the Mass, and the second is someone's uploading of the Mass itself, about half an hour in length.