on June 27, 2021
Today is the 5th Sunday post Pentecosten (Introibo); in the Pauline Rite is the feast of Saint Cyril of Alexandria, moved from February 9th, although I imagine that the Sunday suppresses any commemoration of it. At Saint-Eugène, Mons Athanasius Schneider, Auxiliary of Saint Mary of Astana in Kazakhstan, is celebrating the Pontifical Mass; they are singing Charpentier's Ecce sacerdos magnus H 432 now.
During the vesting of the Bishop, Charles d'Ambleville SJ's Veni Creator Spiritus, which is lovely. The Traditional Rite in Pontifical Masses is more complex in its details than I can describe; the master of ceremonies has his hands full, ahem. It was 82 at 0022 and is 72 now, at 0211.

The Kyrie Orbis Factor and Gloria.
The Gradual, Protector noster aspice Deus, and the Alleluia, Domine in virtute tua.

M. le Chanoine is welcoming Mons Schneider and then I presume that the Lord Bishop will be homilizing.
The antiphona ad Offertorium, Benedicam Dominum qui mihi tribuit intellectum.

The Schola, during the incensing of the altar at the Offertory, is also is singing an adaptation of Psalm CXL, Dirigatur Domine oratio mea, which is a Gradual used in Lent I believe and then later in the ecclesiastical year too. The faux-bourdon was made by l'Abbé Cardine of Coutances (about whom I find nothing in the pages of French or English Wikipedia).
The Sanctus XI.
The Agnus Dei XI.

Michel-Richard de Lalande's Tantum ergo Sacramentum is being sung before the proper Communion.

While at Saint Mary's here many would blanche at the authentic patriotism of the Dómine, salvam fac Gálliam sung each Sunday at Saint-Eugène, we are the ones who are missing something from our worship.

The Marian antiphon sung during the reading of the Last Gospel is Inviolata integra et casta es Maria this morning.

Just over two hours-- there was no Asperges, and Mons Schneider didn't prose on in his homily quite as long as is usual for the Saint-Eugène priests, ahem. Now am going to take my morning walk before Prime. It is just after 0400, and 68 degrees.
Post Primam. Yet again this morning going out was like wading into a pool of warm water; my shirt was moist with sweat after the first ten minutes. It is evidently 67 degrees now; no cooler than this until Tuesday morning.
The evil and deranged neighbors who are lighting fireworks 'early' (there is a municipal rule that limits this to Independence Day itself, probably between 2000 and 2100) are being excoriated by the righteous and enlightened neighbors who wouldn't be caught dead burning such things. The poor cats! I do enjoy Nextdoor occasionally. 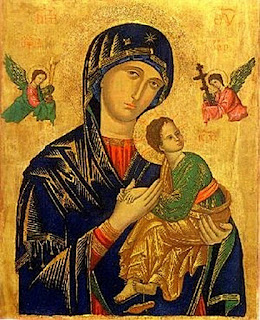 It is the feast of Our Lady of Perpetual Help, here and here in French and in English.
The video recording of the Pontifical Solemn High Mass celebrated by Mons Schneider.

Post Tertiam. It is already over 80 degrees, tsk, at 0915. I had been figuring that the mages were covering their a---es somehow by predicting 110 later on today but perhaps they've been serious about it.
Ante Sextam. Two Chopin recitals on Sundays in the summertime, evidently: one from Żelazowa Wola and one from the Chopin Museum, projects of the Chopin Institute. Earlier, Ewa Leszczyńska sang a program of Chopin and others' songs, accompanied by Janusz Olejniczk, at Żelazowa Wola.