Today, forty days after Easter, is the feast of Our Lord's Ascension (Introibo).

Holy Mass at Saint-Eugène is beginning now momentarily any minute any time now. The occasional delays of the beginning are due to the previous Mass running 'over time'. The Schola is singing the Mass Ad Maiorem Dei Gloriam (1699) of André Campra (French Wiki, with much more detail than the English), maître de chapelle at Notre-Dame and at Versailles in the reign of Louis XIV etc. The Credo is Henry du Mont's, who was maître de chapelle to Louis XIV. The sequence, from the proprium of Paris, is Solemnis haec festivitas. A motet at Communion of Jean-Batiste de Lully, Omnes gentes; at what point and in whose history books Lully acquired the particule nobiliare I don't know.

From the folks at Neumz on the Introit Viri Galilaei.

This Introit announces, with brilliance and with a melody that is among the most beautiful in the Gregorian repertoire, the great solemnity of the Ascension. The text, extracted from the Acts of the Apostles, is made up of the words of the angels to the Apostles on the Mount of Olives. Jesus ascended to heaven; Jesus must return one day.

This hymn presents us with a beautiful image. The Apostles look up to heaven, a gaze reflected by the Church. Ever since Christ ascended to heaven, the Church has kept looking to the sky in ardent expectation until He “returns” (ita veniet). Jesus has gone for now, but he will return; the composer's intention, made explicit by the melodic treatment of this passage, was to highlight the second advent of Christ at the end of time, and thereby direct the gaze of the disciples of Christ to this ultimate coming of the Messiah that the Church awaits with all her love.

Our Introit, taken from the 7th mode, the angelic mode, is happy and enthusiastic, articulated using a powerful breath. It is a light piece, soaring even, and very flexible. It consists of three main melodic phrases: the first corresponding to the declaration of the angels; the second to their promise; and the third to the three alleluias that conclude this song of joy.
The melodic line unfolds with great rapidity, almost without any support, up to in cælum, an expression that punctuates the two sections and precedes the cadence, articulated here by the two words, ita veniet. Note the great contrast with what preceded: ita veniet is sung in a very broad, affirmative way, especially on the powerful held note at veniet, which requires a beautiful crescendo, just before the gentle conclusion of the cadence. The expansive length attached to veniet could well indicate, in the mind of the composer, the length of time spent waiting for the return of Christ.

Gave up trying to format that. This happens because I neglect to remove the existing formatting when I copy text here from elsewhere. 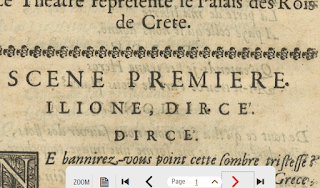 Ante Nonam. Have been listening to the Idoménée of André Campra this afternoon. Five acts, two and three quarter hours, Les Arts Florissants from about twenty years ago. It's quite lovely and Mozart used a libretto based on it for his Idomeneo. Such cheerful music for what is, after all, an unpleasant tragedy.