Was up shortly after three, and so it is still before...

Dawn by, oh, 35 or 40 minutes; am going out on a longer walk for the sake of the shopping in ten minutes or so, Prime therefore keeping until I return. And I think I'm done making a post each day about the collects-- it is too much fussing about in the mornings, I am certainly no great expert on them, and the number of people who look at those pages is a fraction of those who read here, if I have remembered my mathematics anyway. (That last is a joke.)  I seem to be having no luck at uploading any video from YouTube, tsk. 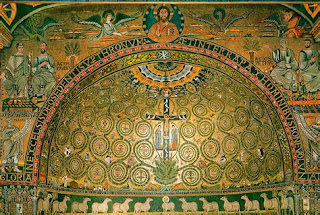 Holy Mass for the Monday in the 2nd week of Lent is streamed from Saint-Eugène at the usual hour.

The basilica of the two holy physicians (Anargyri) [the collecta is at the Basilica of Saints Cosmas and Damian] stands in the Forum, having been adapted by Felix IV in the ancient aulea of the Eroon of Romulus, and the temple Sacrae urbis where the catastal archives of the city were kept. In the Byzantine period it was celebrated as a famous sanctuary where the two martyrs worked all manner of marvellous cures for their clients. The Basilica of St Clement [where is the station] rises on the site of an ancient Roman domus, which a well-founded tradition connects with the Pope of that name. There is nothing unlikely in the story that Clement, in the days following the Neronian persecution, gathered together the scattered flock of Christians under the very roof of the house which we visit to-day, and encouraged them to persevere in the faith. It appears that later, during the final persecution, there was a deliberate attempt to profane the spot sanctified by Christian worship, by erecting here an altar to Mithras, which, however, under Constantine, gave place once more to the cross of Christ. A careful study of the plan of the basilica allows us to infer that the architect wished to make the position of the altar correspond with that of an ancient aula beneath it, which was probably known to be the one used by Clement. St Jerome particularly mentions the dominicum Clementis, and as in early days basilicas were not erected in Rome to the martyrs except over their tombs, or on the site of their dwellings, the tradition concerning the house of Clement does not appear to be in any way doubtful. The actual basilica was built on a higher level by Paschal II (1099-1118), after the first had been seriously damaged in the great conflagration on the entry of Robert Guiscard into Rome in 1084.

The Introit is derived from Psalm XXV, and is in perfect harmony with the place and the traditions concerning it. Let us call to mind that we are in the house of a martyr, and, in addition, in one of the chief ecclesiastical buildings of Rome. 'Redeem me, O Lord, and have mercy on me, for my foot hath stood in the direct way'. It is the martyr himself who is speaking in the person of the Psalmist. 'In the churches will I bless the Lord'-- that is, in those assemblies which were brought together by Clement in his own house, and which were the forerunners of our stational synaxes. 'Judge me, O Lord, for I have walked in my innocence, and hoping in the Lord I shall not be weakened'. In the Collect we beseech God that we may not only afflict the flesh by fasting, but may also abstain from sin and follow justice. Thus we ask for two gifts, the one negative, declina a malo, the other positive, et fac bonum, without which piety would not be a virtue. Every virtue, in fact, disposes us to do good; indeed, it is not possible to conceive a virtue which does not tend to produce tangible result.
The lesson from Daniel (IX 15-19) describes in sorrowful words the sad condition of Rome in the seventh century, when the city was more than once surrounded by its enemies, devastated by war, famine, plague, and earthquake, so that Gregory the Great expected nothing less than the end of the world. But an immovable confidence in God and an unbounded hope lie under the pathetic lament, so the Romans, like Daniel in Babylon, doubt not that the merits of their great Apostles will avail to save the holy city, and that the great destiny promised to her by the divine Redeemer will surely be fulfilled. The Gradual comes from Psalm LXIX: 'Be thou my helper and my deliverer; O Lord, make no delay. Let my enemies be confounded and ashamed that seek my soul'.
What became of Clement after his apostolate and episcopate in Rome? An ancient tradition says that he died in the Chersonesus, and perhaps the Gospel of to-day (John VIII 21-29) is intended to allude to this in the words of our Lord to the Jews, when he announces his departure from Judea and the impossibility of their following him: 'Whither I go, you cannot come'. For Clement was an exile from Rome, even after death, and the pagan world which refused his teaching and drove him into banishment in the mines of the Crimea could not follow him to the sublime regions of faith and celestial glory. The Offertory, from Psalm XV, renders thanks to Almighty God for having given us understanding, and dwells upon the thought of his constant presence at our side, lest we should waver in face of temptation. The Secret asks that our sacrifices of praise and propitiation may render us worthy of the divine protection. The Communion is taken from the first verse of Psalm VIII: 'O Lord, our Lord, how admirable is thy name in all the earth!' He who represents on earth this name of God is, first of all, Jesus Christ, the eternal Word of God, and, in his human nature, the perfect image of the Father. Secondly, it is ourselves, as being created to the likeness of God and raised by grace to participate as far as we are able in the divine nature, and to renew it in Christ by the sanctity of our Christian life. The Post-Communion is common to many Masses: 'May this Communion, O Lord, cleanse us from guilt, and make us partakers of a heavenly remedy.' In the Oratio super populum we beg that as God has put into our hearts the hope of pardon, so he will bestow upon us also the grace of his accustomed mercy. Terrible are the crimes caused by envy, so vividly described by St Clement in his epistle to the Church of Corinth, when he attributes to this ignoble passion even the martyrdom of St Peter and St Paul, and the immolation of numerous victims of Nero in the Circus Vaticanus. The Gospel of today describes the envy of the Synagogue-- that implacable stepmother of the Church throughout the ages-- against the divine Redeemer, and at the same time it announces its punishment: “You shall see me, in your hatred and despair, but you shall not find me, nor can your
malice touch me; and you shall die in your sin'.

The tree in bloom. I somehow confused the formatting for the entire post when adding this, tsk.

It is also the feast of Saint Agnes (19th century), of Blessed Christopher (15th century), and of Saint Leoluca [I include this only because of the 20th century association] of Corleone (9th century).