Still grey outside and raining...

Although, and given the quantity of rain yesterday this wouldn't surprise me, perhaps what I'm hearing is water from then and the earlier hours of the morning distributing itself; it isn't light enough to see much yet. I've been up since 0300; said the Night Office and am now listening to Canon Guelfucci's sermonizing from Saint-Eugene: it is the Dominica in Quinquagesima, the final Sunday of 'fore-' or 'pre-Lent' in the Traditional Rite, the 6th Sunday of the Tempus per annum of the Pauline Rite. I availed myself of the archiepiscopal dispensation from attendance at Mass last evening for undoubtedly selfish reasons (put bluntly, it was raining and I didn't want to go out) with the self-exculpatory knowledge, however, that I'm going out first thing Wednesday morning, the dies cinerum.

This is the second or third time that the Schola has sung this Media vita of Notkerus Balbulus; I think I must add the critical edition of his sequences and so forth to my list-- five bucks set aside each month will get me there eventually, even though it be in 2023 or 2024 (am guessing of course: even the least of books costs exorbitant amounts of money these days). 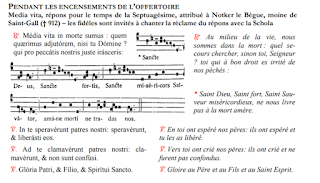 I wonder if the response is from Notkerus also or if that is a contemporary adaptation, presumably of M. de Villier's. What's most captured my attention this morning is the 16th century 'polyphonic Polish chant' of the Trisagion that accompanied the entrance of the celebrant but I must attend to the Mass.

The Communion for Quinquagesima of Louis-Nicolas de Clérambault was quite lovely.

The chant at the entrance, the polyphonic Polish Trisagion ('of or from the 16th century'), recalled Jerycho's version, Swięty Boże! Swięty mocny! Certainly, the Trisagion itself is the same, Latin and Polish; the Polish says that the melody is 'after Fr M.M. Mioduszewski (1838)' and the text doesn't include the Gloria Patri. Hmm. 'After' in this case means, I suspect, that Fr Mioduszewski noted the traditional melody in a compilation he assembled.

After the Trisagion itself, the Polish continues, more or less:

And then the Trisagion is repeated.

Time for Terce and breakfast, before Vespers.

Saint-Eugene is celebrating their annual Forty Hours devotion beginning, in five minutes or so, with the Solemn Mass of Exposition. This has become quite the day of 'church-going', albeit that it is all of the virtual sort.

Ante Sextam. Tomorrow, a votive Mass of the Blessed Sacrament although it's the feast of Saints Faustinus and Jovita, Martyrs.