In the Martyrology earlier...

For tomorrow, there is this notice: Alexandriae sancti Joannis Eleemosynarii, ejusdem urbis Episcopi, misericordia in pauperes celeberrimi. A bell went off, dully in the back of my poor head, and I thought of the Oficjum i Msza o Sw. Janie Jałmużniku, the Office and Mass of Saint John the Almsgiver, recorded in 2016 by the ensemble Jerycho [Tumblr and Facebook] in a series called Musica in Ecclesia Cathedrali Cracoviense Audita: lo! it is the same saint, celebrated at Alexandria and in Cracow (CE and Wiki). 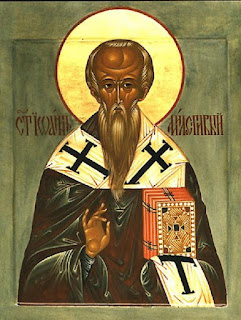 There is a complete setting of the Office (of nine lessons) and the Mass, including the prose or sequence Fervore devocionis. After Terce I will hunt about and see if any of Jerycho's recording is on YouTube.