Is still falling or not. It is the feast of the martyr Pope Saint Marcellus (CE, Introibo, Wiki); my next task is to check to see if Palestrina's Missa Papae Marcelli has its name from this particular pope, as I think it must since I can't recall a Marcellus II vel alii... ha, there was a Pope Marcellus II "who reigned for three weeks in 1555", according to Wikipedia; the Palestrina Mass has got to be his most significant memorial, although he was the first Bibliothecarius Sanctae Romanae Ecclesiae, the first cardinal to head the Vatican Library.

Am awaiting the beginning of Sir James MacMillan's Christmas Oratorio. NPO Radio 4 is playing his Christus vincit now, which confused my poor head because I wasn't quite sure what was airing. The musicians-- the Radio Filharmonisch Orkest-- are tuning their instruments before MacMillan enters the Great Hall. The soprano Mary Bevan and the baritone Christopher Maltman are the soloists, together with the Groot Omroepkoor.

During the interval, a conversation (Hans Haffmans is the NPO presenter) with Benjamin Goodson, the director of the Groot Omroepkoor (which is much nicer than 'Dutch Radio Choir'). At some point in the proceedings, Haffmans played MacMillan's Lux aeterna (from Strathclyde Motets).

And a conversation with the composer, after. Well, am not very interested in the organisation of the work, although there is a scheme to it featuring high points midway through each of the two parts (will have to read through the book again to try to see what they are talking about; I downloaded the pdf here but cannot find it on the NPO site now to link to and am not searching any longer-- believe I linked to it yesterday, anyway). It is suggestive that both MacMillan and Haffmans were already talking about performing parts separately e.g. a suite of the four symphoniae, individual arias, and so forth. There are many passages of real beauty indeed but it's certainly not the Weihnachts-Oratorium; I look forward to a second listen, and a recording. A beautiful Dawn and morning in spite of my sense 'damp' at 0430. Sunday morning. I must look but this Boosey & Hawkes page seems to say that NPO Radio 4 is making a recording of the premiere available for listening on demand; hmm.

Post Sextam. It at last occurred to me that I had forgotten my series 'Today's Collect', tsk; since December 28th. Only began it on the 21st, and then was ill and not interested in sitting here typing. Quite why I remembered on Holy Innocents' Day and not after, am not sure, who knows. Have Serge Lancel's Carthage begun, relief from the heavy going that is J.N. Adams's The Regional Diversification of Latin 200 BC - 600 AD.

Was interested to read Dr Joseph Shaw's article at the Homiletic and Pastoral Review website, The Demographics of the Extraordinary Form: Young People, Families, Sex Ratios, and Diversity. He is the chairman of the Latin Mass Society of England and Wales. Welcome findings!

Tomorrow is the feast of Saint Roseline de Villeneuve, a Carthusian nun and prioress who died on 17 January 1329. Her body was, evidently, found to be incorrupt, her eyes in a particularly striking way: they are preserved in their own reliquary. Am borrowing these photographs from the blog Maitre-Chat Lully. 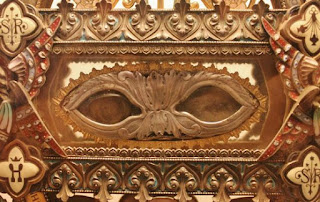 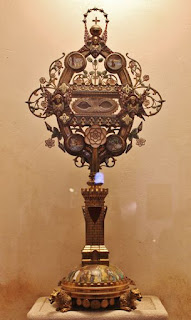 The left eye of the Saint is collapsed and partially corrupt after Louis XIV's physician in the 17th century was instructed, ahem, to 'investigate', ahem, and proceeded to pierce the eyeball, releasing the humor vitreus.