A beautiful morning, a lovely Dawn...

Very rose and scarlet and red today. It is the Octave of Our Lord's Epiphany (Introibo; after 1955 the new feast of Our Lord's Baptism, an innovation of Pius XII, replaced the celebration of the Octava, which was suppressed: Our Lord's Baptism had been an element of, part and parcel of, the celebration of the Epiphany). We now will have three Sundays post Epiphaniam before Septuagesima on the 31st.

Am running late this morning and so must get to Terce-- it's already a quarter past nine.

Two notes, as a matter of fact. MacMillan's Stabat mater, that had its premiere in the Sistine Chapel-- for which I reckon one ought to be grateful to his Holiness the Pope-- and is a wonderful, beautiful work, is being performed at noon PT by The Sixteen and the Britten Sinfonia conducted by Harry Christophers at the Barbican on Good Friday, 2nd April, the plague-infected government permitting. The Bach St John Passion to have been performed at 0700 PT by the English Baroque Soloists and the Monteverdi Choir, led by Sir John Eliot Gardiner, has already been cancelled. Hmm; I had a marketing email earlier from The Sixteen which brought this to my attention: so at least whenever someone pushed the button to send that mail, the MacMillan was still on. We shall see.

Was reading a series of essays about Dante in music (I'd never heard e.g. of the Frenchman Benjamin Godard's 1890 opera Dante-- but there is a heck of a lot of works I'm ignorant of) and laughed aloud at this still from Mario Caserini's 1913 movie Dante e Beatrice: I don't really know what sort of mental image I have of them but those aren't my ideal Dante and Beatrice. 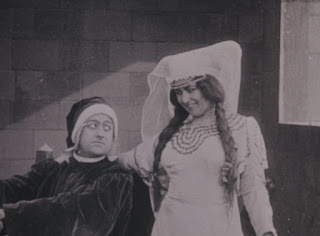