I remembered that Saint-Eugène was streaming...

The Mass for Saturday Ember Day (Introibo) at 0030, tsk, approximately five minutes after I completed Lauds at 0120ish. My inner alarm woke me just before midnight for a reason, obviously, but I was too dense to realize that, tsk.

While I am rather done with Beethoven for the time being, I noticed last evening as I made the final rounds before Compline that Fr Edmund Waldstein, OCist, of Heiligenkruez in Austria, had posted a video recording of his aunt Elizabeth Waldstein playing Sonata no 21 in C major op 53 which Beethoven dedicated to her ancestor Albrecht. The 'doddery Swedish lady' who appears first in the video turns out to be the Austrian ambassador to the Court of the Swedish King, as Fr Edmund pointed out.

The first 90 seconds or so of the Sibilla catalane put my mind on the field of battle as the Last Trumpet prepares to sound; it is not what one might want to hear as he wakes from an unsettling dream.

Dom Jacques-Marie Guilmard of Solesmes is discussing the 'liturgical reform' in today's 'Advent calendar' from Neumz.

This wouldn't have been my choice at this point in the season but, eh, I will listen and perhaps learn something (pft, particularly since, judging by the text that accompanies the video-- and having at last watched the video-- it looks like it isn't the 'post-conciliar so-called reform' Dom Jacques-Marie talks about at all but the introduction of the Roman chant into Gaul in the 8th century; will leave this here as evidence of my willingness to react at the very mention of 'reform', tsk).

The fact that I can warmly embrace the final lines of Dr Kwasniewski's post yesterday at New Liturgical Movement on the inability or unwillingness of Paul VI to govern the Church during his pontificate so that Sacrosanctum Concilum was faithfully implemented tells the reader how I am likely to react to the good Benedictine's words. (But see supra-- he didn't actually talk about this nonsense at all, tsk).

... There is no reason why the post-Conciliar liturgy cannot and should not be sung with Gregorian chant and sacred polyphony, but this baleful prediction did, sadly, prove to be true. Honesty likewise requires us to recognize that this happened in no small part because the Pope did nothing to safeguard the dignity and beauty of the liturgy, to “preserve and foster” the “treasure of sacred music” as the Council had asked, or to exclude inappropriate music from our churches.

At the very same audience, Paul VI also declared that the first motive for the “grave changes” which were taking place in the liturgy was “obedience to the Council.” As a very witty man once said about Teilhard de Chardin, he “can be excused of dishonesty only on the grounds that before deceiving others he has taken great pains to deceive himself.” Fifty-five years have passed since the official closure of Vatican II; it is well past time for us to take similarly great pains to undeceive ourselves about the failure of the subsequent reforms.

Dr Gilleland offers us a quotation today from the first volume of Walter Savage Landor's Imaginary Conversations that seems coincidentally to the point; it is Lucian, chatting with Timotheus.

Surely we ought to remove an error the instant we detect it, although it may be out of our competence to state and establish what is right. A lie should be exposed as soon as born: we are not to wait until a healthier child is begotten....

At New Liturgical Movement, Dr Gregory DiPippo presents the masterpiece Tree of Jesse by the Low Lands painter Geertgen van Haarlem (Gerald, maybe born in Haarlem, likely an oblate of the Knights of Malta-- 'of the Hospital of St John of Jerusalem, Rhodes, and Malta'; very little is known for sure). The 'O' Antiphon at Vespers today is of course O radix Jesse qui stas in signum populórum, super quem continébunt reges os suum, quem gentes deprecabúntur: veni ad liberándum nos, jam noli tardáre. A couple of years ago, Dr DiPippo wrote this wonderful post on the use at Augsburg, Augusta Vindelicorum founded by Drusus, Germanicus, and Tiberius, which included proper capitula and orationes for each day 'O' Antiphons were sung. 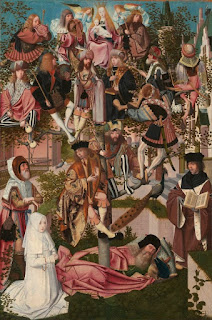 A recording of the antiphon here, with Maestro Pärt's following.

Ante Nonam. Am listening to Richard Strauss's Elektra from the Hofoper in Vienna-- am fairly sure this is the same production sung at the Salzburger Festspiele in July or August. Elektra raving to her mother Klytaemnestra that Klytaemnestra herself will be the sacrificial victim is one of the most terrifying scenes in opera. On the other hand, taking up half an hour to confirm to everyone's satisfaction that Orest is indeed dead is a bit much.

Among many other pious works, Jean-Jacques Olier accomplished the foundation of the Sulpicians, and the foundation of the great work of his seminary, model for many others throughout France and the Catholic world. He was a master of the spiritual life as well, following Cardinal de Berulle, Saint François de Sales, and Saint Vincent de Paul. A lovely brief meditation of his is here, alas in French, a meditation on Our Lord in the womb of His great and immaculate Mother, from his Vie intérieure de la Très Sainte Vierge-- in the womb of Mary, holiest apart from God Himself, Our Lord found, upon His Incarnation, 'a world of holiness' that eased the transition, as we would say, from Ineffable and Eternal to the realities of human life.