Dawn is awakening without the splendid raiment of...

The other day: grey, indigo, and blues this morning. It is the Wednesday in the second week of Advent (Introibo, DO), a feria, although the second day in the Octave of the Immaculate Conception in places where that is kept (Introibo; it is the Mass of the feast itself). I think Saint-Eugène is not livestreaming their evening Mass today alas.

Post Sextam. At Saint-Eugène they streamed the Mass Populus Sion at noon, I guess.

In order to keep to the Advent lessons and the ferial psalmody, I used the Office for Matins and Lauds as it existed before 1910 (i.e. because after 1911 the feast of the Immaculate Conception takes precedence before the Advent feriae), adding a commemoration of the Octave at Lauds. In the same way, I used the earlier Office for Prime in order to have the preces, which wouldn't happen in the Octave; but the third nocturne lessons from the Octave day will re-pay reading-- Saint Sophronius of Jerusalem, patriarch there in the first half of the 7th century. What did the Archangel Gabriel say when he appeared to Mary? Ave, gratia plena, Dominus tecum, which begins in the Greek, Χαιρε, that is, 'rejoice'. Why such joy, he asks?

The Neumz 'digital Advent calendar' video for today (and other days, evidently) features Dom Jacques-Marie Guilmard of the Abbaye Saint-Pierre de Solesmes discussing Saint Gregory and the chant that is called by his name.

At 0900 Klassikaraadio is broadcasting, livestreaming, a concert from Tallinn featuring the countertenor Andreas Scholl and the Nordic Symphony Orchestra in a program of Pärt, Handel, and Purcell. I had the vague impression that Andreas Scholl was a player in pop music circles, tsk; he is making perfectly sane and indeed praiseworthy remarks in his interview with the Klassikaraadio lady. 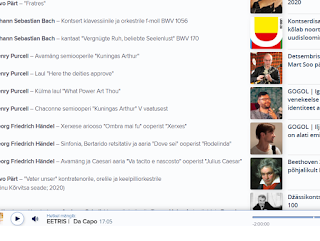 And at 1130, there is a recital at Wigmore Hall by the pianist Paul Lewis who will perform Beethoven's Diabelli Variations, preceded by Haydn's Sonata in C minor H XVI 20. Beyond these, I think today is a Handel's opera day, although which one I haven't decided. Rodrigo, perhaps, a recording from Göttingen from last year.

Post Sextam. I forgot that this was happening, ahem, so am listening to the recording at YouTube, but the Capella Cracoviensis sang six Bach motets-- BWV 225-230-- at their concert today in Gdansk (I don't seem to be able to embed the video) in the context of the Actus Humanus Festival 2020.