The Sun has broken through the clouds...

And the rain has stopped for the time being. I went along a different route for this morning's spatiamentum than the one I usually follow; was a pleasant experience, on the way back, watching the Sun rising in the purple, black, and washed-out yellow skies.

Klassikaraadio is streaming a re-broadcast of a recital by the pianist Alexandre Tharaud in Barcelona in January of this year in its 'Concert Hall': Lully, Couperin, Royer, d'Anglebert, and Rameau. That's at 0900; Holy Mass from Paris begins at 1000. I haven't yet looked at what else might be online today. The rain has begun again after Sun hid himself, more or less immediately after I wrote the first sentence supra.

I don't feel the need to note every essay or article I read here but this was amusing-- I got around to the latest emailed 'Dispatch' from the people at the New Criterion and saw this gem from a couple of years ago by Anthony Daniels ('Dr Theodore Dalrymple') on 'the second worst poet in English', Cumberland Clark. Who is the 'worst poet'?

He was the second-worst poet in the English language, not far behind William McGonagall. Born in 1862, he seems to have commenced author, as the saying goes, in his middle fifties, thereafter suffering, or perhaps enjoying, severe graphomania, the compulsion never to leave off writing. Until then he had led a wandering life, abandoning his native London for Australia as a teenager, studying for the church at Sydney University, and working variously as a minister, gold miner, and sheep farmer in many far-flung places. But he settled eventually in Bournemouth and evidently decided that Bournemouth was best.

Much of his poetry extols the town. It is wonderfully, gloriously, hilariously awful. Here, taken at random when I opened the second edition of The Bournemouth Song Book (1934 second edition, 1929 first, privately published) is the opening stanza of “Bournemouth Boarding Houses”:

The boarding houses met with in this splendid seaside town

Although among so many you meet types in great variety.

This continues for about four-and-a-half quite closely printed pages.

I know I had never heard of the 'graphomaniac', who had also a good number of good qualities; Daniels' is the sort of essay I appreciate: clarity and humor about the ridiculousness of the poetry but not at all mean-spirited and aware that the subject is a human being, much more than a laughable poet.

Cumberland Clark doesn't even have a proper Wikipedia page. At Wikisource, however, I found the song The Ogo-Pogo, 'the funny fox-trot', from 1924. There are a couple more verses, ahem. After Terce and breakfast I must look about and see if I can find any of Mark Strong's other dance music-- it would be too much to hope that there is recording of this Clark song. 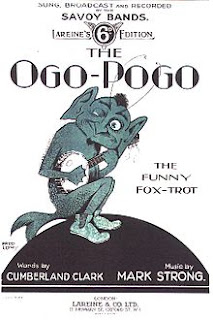 ~~~
Followed Mass and managed to return in time to Klassikaraadio for Tharaud's Rameau, from the Nouvelles suites. Have returned to Clare Wilkinson but must make an appointment for the taxi on Friday before I forget-- yet another four hours at the dentist's office.
I'm pretty sure that I agree with each of the propositions in this column by Mark Steyn. Welcome, President Pence!

I think the American people would enjoy Pence as president for a couple of months, and Pence would do the tedious interregnum shtick better than a justifiably sour and embittered Trump. And, if nothing else, it would oblige the Dems to re-order all their T-shirts, because Joe would now be the "47th president". The political "norms" of contemporary America are mostly garbage: No founding father would have contemplated for a moment a two-year presidential campaign, and, if you'd suggested it, they'd have cried in unison, "Come back, George III, all is forgiven." It's a total waste of time, energy and money, culminating in a three-month "transfer of power" that the Deep State uses very effectively to ensure that as little as possible actually gets transferred.